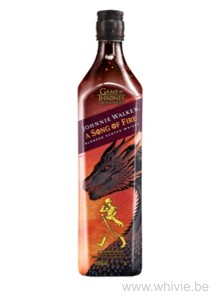 The second new Game of Thrones release, launched next to A song of Ice, is this A Song of Fire with the House Targaryen dragon on the label. It has a slightly higher ABV and the heart consists of Caol Ila. Nice color, it’s true. But most likely, like A Song of Ice, an entry level blend, meant to attract a new audience to whisky.

On the nose – which you will need to leave to breathe for a minute to get rid of the initial rubber note – I detect caramel and vanilla, some toasted oak, roasted chestnut and cinnamon. Some milk chocolate with strawberry filling that precede a subtle smokiness. A fresh slice of roast beef. This is actually quite nice. My fantasy runs free and tells me this is what the breath of a dragon smells like.

It is very creamy – undoubtedly thanks to the grain component, I’d say Cameronbridge – and sweet with a bit of spices in the guise of white pepper, nutmeg and cinnamon. Then some red fruit and chocolate. The smokiness from the nose is much more outspoken, which is good. The Caol Ila is doing its job.

The finish lifts it to a higher level than its predecessors. Warm, spicy, waxy and surprisingly long.

It’s no stunner. Nor cheap. But this is one I would not mind offering to visitors – with our without the Coca Cola Signature Mixer ‘Smoky’.