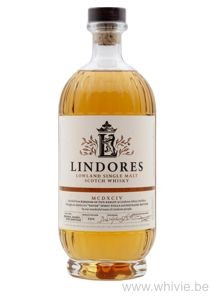 Last summer the long-awaited first release of this new Lowland distillery appeared (at least the one that was made available to the general public). I confess that I don't really know what the difference is with this release that appeared at the same time under the name 'Lindores Abbey Single Malt Scotch MCDXCIV', because the composition is the same, the alcohol percentage is the same... Let's put them H2H.

On the nose it is very similar: sweet and sweet. Granny Smith apples in the pan, hazelnuts and kiwi. This is slightly less sweet but it also smells a little more like yeast without disturbing.

Nice and oily, sweet and candy-like just like his brother. Very fruity on banana, pear, apple and some spiciness thanks to the wine barrel in the mix. Caramel and toffee also appear here. This is also tasty, but it just doesn't reach the level of the Commemorative First Release. Pour in another spoonful of brown sugar and we have identical twins. But that sugar is missing here.

It still has a way to go, but the potential isclear. The only difference I can detect is... the label (and the number of bottles, of course, of these 40,000 have been released). Apart from that, they are, in my opinion, almost identical whiskies. Well, not quite, but close enough. This one is a little less round, a little less sweet. But since they're both very friendly priced, it doesn't bother me that they're so similar. They even get the same score.