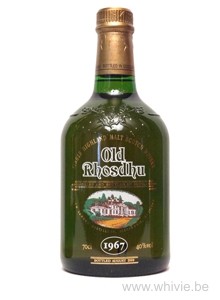 Old What? Never heard of Old Rhosdhu? No worries, not many people have. Worldwide there are less than 40 known bottlings of this particular whisky. It’s a single malt that was produced between 1966 and 2000 by the Loch Lomond distillery. We’ll try an official oldie that was released two decades ago. For me, it’s the first encounter with this malt!

The nose is very soft – softer than a newborn’s backside. Very fruity on all kinds of European fruit with apples and pears up front, before it slowly turns somewhat tropical. Think mango and papaya. Some orange juice and lemongrass. A fresh note kicks in as if from eucalyptus and a fresh bouquet of spring flowers. A lovely surprise.

The malt could have done with a little more body, but the taste is pleasant indeed. Very soft on the fruit that already showed itself on the nose, with a soft peppery note. Some more citrus now. Think grapefruit evolving towards citric acid candy. Underneath simmers a note of cardboard, but that is kept under control effortlessly by the fruit. Again some eucalyptus and even some mint. Fresh and lovely.

You cannot call the finish long, but it certainly is good. Mildly drying it dances on the palate to slowly fade away in a haze of lemongrass.

I had no idea what to expect from this malt. First off I had never tried and Old Rhosdhu and second, it’s a golden oldie, of course. The old adagio ‘they don’t make ‘m like this no more, sir’, certainly rings true here.