The 26 whiskies listed below are intended to be a guide for those who seek top-shelf Canadian Whisky. This is version 2.0, v1.0 was posted in 2016. Some of these are no longer available at the retail level and some are available only at the distillery level. All are excellent examples of Canadian Whisky.

Hmfff.....I just checked and I don't have access to ANY of these. Seems like the only Canadian bottles I can pick up are basic Crown Royal or Canadian Club. Oh well, guess I'll stick to the Scotch for now.

@RianC, I'm curious to learn the batch number of this bottle. The code is located below the labels, near the base of the bottle. Shining a light or torch on an angle while spinning the bottle slowly will make the laser etching magically appear

There has been batch variation with Lot No. 40. All batches are good examples of pot still distillation method and rye grain characteristics. The early release batches (circa 2012) contained malted barley, many batches since do not. This is/was the rye component (1/3 of blend) used in the amazing Wiser's Legacy 2010 - 2017and JP Wiser's Dissertation 2017 (7/8 rye, more than one style of rye). The Hiram Walker Distillery in Walkerville (Windsor) Ontario, Canada produces rye distillate only one month of the year.

I’d love to find some of the Crown Royals you mention. The Blender's Select was good, but felt underpowered at 45%. The Northern Harvest Rye is always enjoyable for me, but it has to be one of the whiskies with the largest margin of batch variation I’ve ever experienced. I’m sure I’ve mentioned it before, but my first bottle of CRNH was otherworldly terrific. I bought it on a whim, about a month before Murray crowned it “Best in the Known Universe”. It would have been at least a 90 pts whisky for me. What set it appart from its successors was the rich, thick texture (which all my later bottles lacked) and a beautiful walnut note to compliment the rye bread and cloves on the finish. The last bottle of CRNH I bought was pleasant, but a bit uninspiring. Maybe an 83 pts whisky.

@paddockjudge I may be mistaken, but I believe Dr Livermore stated, on a podcast, that they stopped using malted rye because it produced a cauliflower note that they had to “distill away” (his words).

@OdysseusUnbound, I too enjoyed the Pre-Murray CRNHR, it was a substantial and delicious whisky. I tried this stuff at 50%, incredible!

The Crown Royal Corn Based (Bourbon Mash) 60% abv is otherworldly. I can't understand why it would be released as a watered down version. Come on Diageo, give us the 60% version of this one, not the water- infused blending room version

@paddockjudge Yeah, the Bourbon Mash available in Ontario is 40% ABV and as such, I’ll be passing on it. It’s too bad, because I do like the “house character” of CR, but 40%? Come on!!!!

@OdysseusUnbound, the best CR available on the open market today is CR Hand Selected Barrel, keeping in mind that not all barrels are created equal, but knowing that someone selected them and the least of these is still of good quality. I have yet to taste a poor quality CRHBS. On my most recent trip to the U.S. I didn't find any CRHSB. I hit some great stores, but none had stock. In retrospect, a visit to at least one store with CRHSB should have been included...next time.

@paddockjudge Any idea why the Hand Selected Barrels aren’t available in Ontario? Are they a US exclusive? Do other provinces get the HSB?

@OdysseusUnbound, under normal circumstances I'd blame it on the LCBO, but with Diageo involved, I'd bet that Diageo is punishing the LCBO for making outrageous demands...besides, nobody in Canada under the age of 75 drinks Crown Royal.

@OdysseusUnbound, CRHBC is a US exclusive and even then I think it is only in select markets. I'll gladly share some of mine with you and @paddockjudge once I crack open the bottle... Aren't we due for a group tasting?

Sadly I don't think anyone at Diageo takes Crown Royal for anything else than a cash cow. Even the noble collection is nothing to get excited about, anemic proof, lukewarm experiments.

They should tale a leaf from Brown Forman's book, I am not a JD fanboy but look at what they've been releasing lately? They could have kept pumping out flavored juice and more Gentleman Jack type lite whiskys, they know that stuff sells.

Yet they've put out a rye, a single barrel rye, higher proof anniversary editions, a barrel proof version and now a bottled in bond whisky... They have embraced this segment of the market rather than business as usual.

I am ranting again

@paddockjudge maybe add in Hochstadter's Family Reserve 16 Year Old Rye at 123.8 proof. Although I have not tried all or the oddball impossible to find high proof CR stuff on the list but those I have tried pale in comparison to the Hochstadter's (err ADL)

@paddockjudge we may as well add Suntory to the shit list as they send truck loads of the finest aged high proof 100% rye south to anybody with a couple bucks and some empty bottles.

It sounds like you all want to have a massive Canadian tasting, and I know just the place to do it. Problem is I don't have much to offer in terms of things you haven't tasted before, except maybe, in some cases, Lambertus...

Blind tasting is a good way to gain a fresh perspective...just saying.

@Astroke, I should have stated originally, the whiskies on this list are in a loose order and are from my own stocks with the exception of Cadenhead's Potter's Indian Corn Bourbon Barrel 24 years 56.5% which I tasted on three separate occasions from two different bottles. I would happily add Hochstadter's Family Reserve 16 Year Old Rye at 123.8 proof after I get a taste. There might be a bottle in Texas waiting for a trade.... one of these days!

I might have sampled H 16 once during an epic session but cannot recall without checking my notes.

@paddockjudge - Sorry for the delay! Yes I'd heard they used to use some malted rye but not sure about this batch - I'd guess it's a newer(ish) one but can't make head nor tails out of the codes so will put them all here for you here as requested,

It's as yet unopened but I have that feeling that tells me I'm going to like this one . . .

@paddockjudge And it makes a great diversion to keep the AP30 out of someone's hands when it comes to gingerale...

So...is there an epic session in our future?

@cricklewood, without a doubt there is an epic session in our future.

CARPE DIEM, CANADIANS! As an observer of and very active participant in the nicely developing Canadian whisky renaissance which began, slowly, in earnest 10-12 years ago I can say with conviction that the top-tier Canadian whisky market of 2018 looks to me just exactly like the top-tier US whiskey market of 2010-2011. In 2010-2011 a US whiskey lover who hustled a bit could, sometimes easily, usually with a some difficulty, get her/himself those coveted bottles which she/he sought, at least a few of them. In third quarter 2012 the prices for products like Van Winkle and BTAC whiskies went vertical on the price graphs, and beginning then the drying up effect of available supply has only intensified. I think that you guys who are now putting away every single bottle of Lot 40 Cask Strength, Wiser's Dissertation, Wiser's 52, Wiser's 35 yo, etc, which you can get, are very smart, because it will not take very much for that current tenuous supply to dry up. My guess is that you have maybe 2 or 3 more years before getting a bottle of Lot 40 Cask Strength becomes like getting a bottle of William Larue Weller is now.

@Nozinan, under perfect circumstances, I would be pleased to share with Connosr friends a dozen or two of the top Canadian Whiskies for the 21st Century.

@paddockjudge @Nozinan But who would supply the ginger ale?

@OdysseusUnbound, in order to bring ginger ale to an EPIC Tasting of Canadian Whiskies for the 21st Century, one must be duly qualified. Considering the burden of responsibility, an extraordinary level of knowledge and expertise must be held by the bringer of ginger ale. It has been decided, by the First Minister of Malt and the Undersecretary of Aged Spirits, of the Department of Whisky, that the bringer shall have no less than five hundred (500) published reviews of Whisky/whiskey. The list of candidates is indeed short. 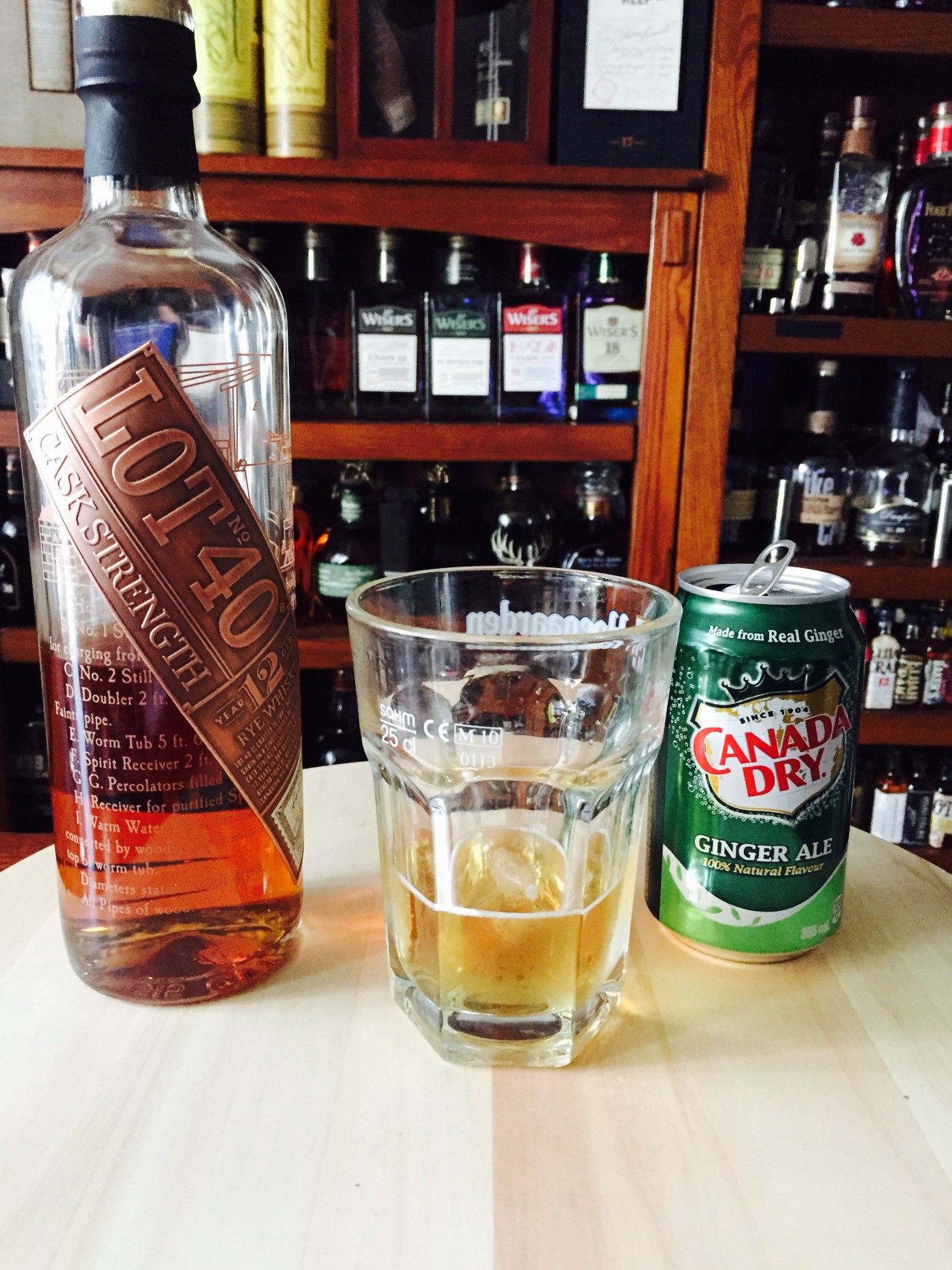 Is this what I risked my life for? Going all over Canada to get you this premium rye?

I’m strictly a PC Ginger Ale man. Unless others are on sale.

@Nozinan, @OdysseusUnbound, I had two, couldn't let that can go to waste.