So, back from summer holidays yesterday was another evening of vertical / horizontal or whatever we wanna call it tastings: this time with the ambo of Benromach. There was a LOT of emphasis how the distillery isn't using any technology but does it all 'by hand' and 'nose'. Pretty romantic and I can see how that artisanal emphasis will appeal, but then again... it's the end result that counts, and of all our verticals this one so far impressed me the least I have to say. Below, a few jotted notes for your perusal.

Benromach 10: it's a 80% bourbon cask / 20% oloroso, matured separate for 8 years, and then vatted together for 2 years in sherry (oloroso) again. It's so well known to you all that I won't spend too much time on it. It's affordable, an easy sipper and a good way into 'peat'. All that said, it's not a favourite of mine. I'd give it a somewhat stingy 5/10.

Benromach 15: essentially it's the 10, but kept for an additional 5 years in the final vatting (oloroso). The nose is pretty faint, the palate is a bit more mellow with some added sweetness (to the 10) and a more pleasant viscosity. The finish is more astringent, some burnt wood and coffee beans. 6/10

Benromach Cask Strength (Batch 1): it's 57.9% ABV so quite a bit stronger. I like many, was a bit excited when this came out, alas... it's a bit fizzy and effervescent on the attack and feels pretty young. In fact, it follows the same method ((bourbon + sherry) + sherry) as the above, but in this case ((6+6)+2) = years. A drop of water opens up the sweetness, but also adds some tannins and bitterness to the finish. 5/10

Benromach Chateau Cissac: bottled at 45%. The vatting seems to follow the principle of the above, but it's finished the last 2 years in Chateau Cissac casks instead of oloroso. There is a nice interplay between the red wine casks and the initial oloroso, creating a somewhat unique sweetness to balance the bourbon casks. However, I also got a whiff of the 'baby sick' which I don't like. 5/10

Benromach Organic: the 'organic' element is the organic barley and the fact that this one is matured for its entire life in virgin oak (American oak). Makes for a different palate: very 'vanilla', but without being bourbon cask (that was quite interesting), and having some woody spice to it. An interesting experiment and that vanilla note was fun to taste, but I probably wouldn't get a bottle 4.5/10

Benromach Sassicaia: also bottled at 45% ABV, and follows the ((6+6)+2) principle, but this time the last two years in Sassicaia. Again, a pretty faint nose, but so far the best interplay between the various components. I'd give it a 6/10 and I did take home a bottle, but I suspect it will last quite a while.

Benromach Peat Smoke: this one is 10, we concluded as it didn't have the 'young spirit' sensation as some of the 8-year-olds. 42ppm (so actually around laphroaigh levels) and only matured in bourbon cask (no sherry). I believe this is a good way into 'smoke' whilst avoiding the TCP/medicinal qualities of some of its brethren. Hence, in that respect somewhat similar to what I'd say about Caol Ila or Ledaig. Alas, I do like this style of 'dry smoke liquid' less, and... 4.5/10

In conclusion: I bet many will take issue with the above, but this just isn't my favourite distillery. The basic taste elements of Benromach, if one can say so, just doesn't float my boat. 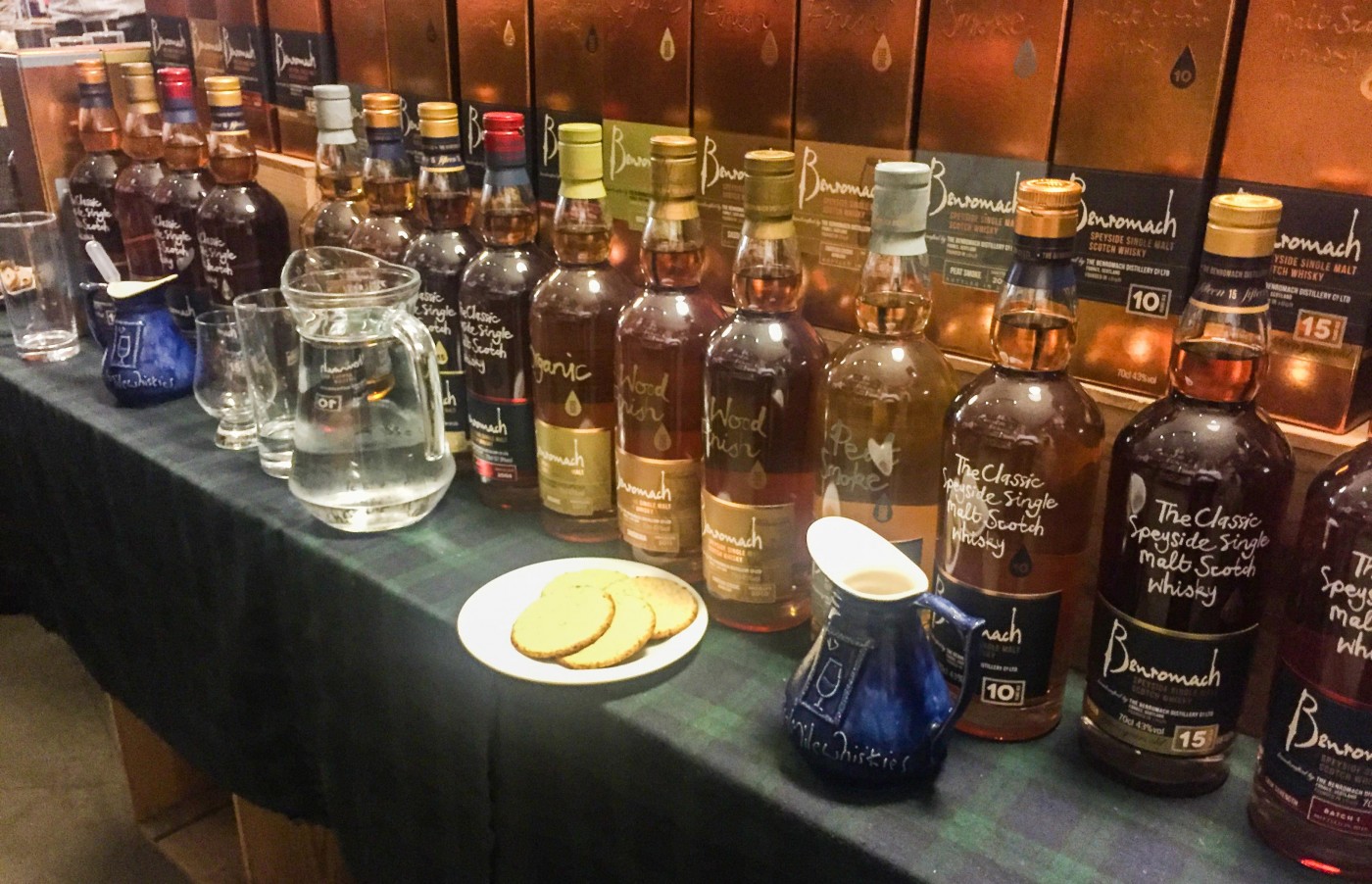 Nice synopsis. I don't have nearly as much experience with Benromach. I liked the 10 many years ago before it was peated. I like the new one quite a bit too. My favourite so far is the 10/100 which I notice is missing from your list. I would very much like to hear from someone who has tasted it H2H with the CASK STRENGTH. At 10% or more above the price of the 100, is it at least as good?

@Nozinan i have tried the 10/100 and liked it but don't have a good enough recollection to honestly compare. However, a few of the real benromach fans present last night appear to have rated the 10/100 higher than the new CS. And I can see that, since the difference between 8 and 10yrs (in my mind) was quite noticeable and to the benefit of the 10.

@RikS thanks for sharing your experience of the event. I totally get that Benromach is not for everyone. My first experience with Benromach 10yo was almost 10 years ago when they reintroduced it with new (now old) branding.
Basically, I walked into a liquor store in Nashville, Tennessee. The store owner was taking people through a generic Scotch tasting. Most of it was standard "Glen" stuff. I asked him if there was anything peated? He pulled a bottle of Benromach 10yo from below the counter. He said that he had been pouring it earlier, but too many people were turned off by it. So, he decided to put it aside and use something else that was more palatable. He poured me a small dram . . . I still remember it: funky sherry and leather over medium peat. I was instantly in love. I don't care for the spirit when it is young. I also am not a fan of the exclusive bourbon cask stuff. I really like their use of sherry casks.

But that is me and my taste. I am happy for you that you got to taste before you bought any. Sounds like it just isn't up your alley. Totally fair.

@Nock That's a great story, and part of what I like with the whisky: there ain't no 'right', and taste has nothing to do with experience, skill, or expertise. It's each man's (or woman's) own journey. Now, I too shall admit that in a way, I do have a debt of gratitude to Benromach - there was a time when I really couldn't handle peaty whisky. In fact, the first time I had a Lagavulin, the taste was haunting me for 24hrs despite fervent tooth-brushing. ...however, taste buds appear to somehow evolve and change, and as I slowly started venturing trying that 'smokey' stuff, it was Benromach 10 that provided a bridge. Today, my cabinet is full of Ardbeg, Laph, Laga etc. So, I guess it was maybe like meeting an old childhood friend... and sadly realising; we just don't really have much in common anymore, but I still remember the ol' times with a sense of fondness.

If anyone is interested I stumbled upon this recent interview with Benromach's head distiller Keith Cruickshank. It's not quite as 'geeky' as the title suggests but it's still interesting. Some honest talk about the use of sherry wood too. I still have a soft spot for this distillery - I especially enjoy the now discontinued 10/100. forbes.com/sites/felipeschrieberg/…

@Hewie I’m a fan of the 10/100 but disappointed that it was discontinued in favour of a more expensive NAS version which I hope to try next month.

A good reminder that $$$s are still the focus of the distilleries.

@Nozinan just ordered a bottle of the 10/100 Benromach from Craft Cellars. On sale right now at 15% off. They still have them.

At the rate I go through them, I should be ok for a while....

@Nozinan Glad to hear you are well stocked. I really do have to get my group onto ZYN. Their prices are excellent. How is there shipping cost compared to the other Calgary stores?

@Nozinan Thanks. About the same as Craft Cellars and a bit less than KWM.