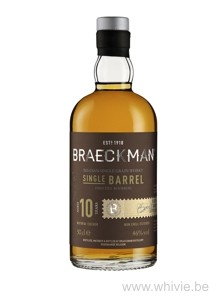 Apart from the single grain, of which Braeckman has a few out there, the Belgian distillery also launched a 10 years old single malt that matured on a first fill bourbon barrel. I tried it at a festival first in November 2019. I was impressed and brought home a sample to retry in the tranquility of my office. Contrary to the single grains from Braeckman – that are made with a mashbill of rye and malted barley – this is in fact a single malt. Filip Braeckman was so impressed with this single cask that he decided to bottle it. The nose is pretty interesting, despite the fact that it is still somewhat yeasty. Famer’s butter with turnip and some patato skins. Serious notes of a horse’s stable. Farmy and reminds me of a farm holiday I had with the kids long ago. Some fruit appears in the guise of apples and Reine Claude plums with a hint of gooseberries and white chocolate. Good fun! Good body as well, but the palate cannot completely fulfill the promise of the nose. It takes a while to reveal itself. After chewing (you know what I mean) for quite a while some grain, yeast and white bread appear, with some jonagold apples slices on top. The alcohol makes me gasp for breath once or twice, despite the modest ABV of 46%. This reminds me more of a barley wine than a whisky. The finish is surprisingly long and mildly drying. This one still has a way to go, I think. It shows potential, but does not yet offer enough on the palate, despite the maturation of ten years. Around 75 EUR for only 50cl of this Belgian malt? No, thanks, too much in my opinion. But if price is no object, it is a fun addition to your whisky bar.