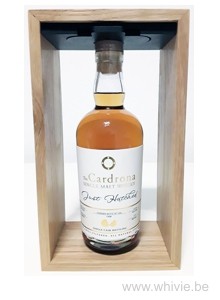 Cardrona was founded only in 2013 by Desiree Whitaker. The distillery lies in Cardrona, between Wanaka and Queenstown at the Southern Alps in New Zealand. Building started in January 2015 and end of October 2015 the first spirit trickled from the stills. Said still were built by the famous coppersmiths Forsyths of Rothes, Scotland. They also produce vodka and gin, but at the end of 2018 the first single malt was released under the banner ‘Just Hatched’ – in half bottles, by the way. The year after, another single cask was bottled, the 2016 Just Hatched, also an oloroso sherry butt. It is my pleasure to put them head-to-head.

The nose is very outspoken. I get oxidize sherry on the one hand, green garden herbs and broth on the other. For a second there, I smell sweetened chicken soup. Weird. Tell me about it. Quite funky, but pleasant at the same time, although hardly fruity. Very spicy, though, but not really sweet. Just a hint of black grapes and dried peach.

It’s pretty oily and spicy on the palate. Think cloves and cinnamon. Now quite a bit of fruit shines through and the green garden herbs and umami traits retreat. Plums and apricots to the fore with some caramel and butterscotch. Becomes very sweet indeed, but remains feisty and the ABV is a kick to the teeth.

The finish is intensely spicy, warm and long. Walnuts at the death.

Wow, this is an impressive powerhouse, considering the age. I wonder what this will taste like at 10 years.

Nice to see you reviewing some NZ whisky

@Hewie I don't come across many of those in Belgium, but if they were plentiful, you'd see more of 'm :-)