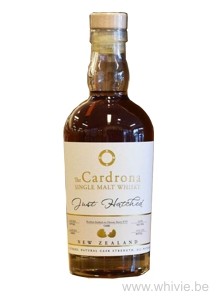 I just tried the New Zealand single malt 2015 Just Hatched that was distilled in November 2015 and bottle 3 years later, in November 2018. Desiree Whitaker decided, in 2020 in honor of the local whiskyfestival Dramfest 2020, to bottle a second young oloroso cask. This was put to sleep on 22nd April 2016 and bottled – in half bottles – on 15th January 2020. At cask strength, of course. I put both malts head-to-head. This one is a bit darker than his predecessor and has a slightly higher ABV.

The nose of this one is nicely fruity on dark and dried fruit. Think plums, sultanas and hint of dried peach with lots of almond shavings in the mix. Waffle dough and caramel. After a few moments, that evolves towards baked apples. Despite the high ABV, it does not scorch the nose.

The ABV is such that for the first two seconds you don’t taste anything. But once the heat evaporates, a lot of sweetness emerges. Caramel, brown sugar, plums, figs and raisins. All things you might expect from an oloroso cask, but with a sturdy spiciness. Chili pepper, cloves and a hint of cinnamon.

The finish is long, warm of the woodspices and a bit drying.

More impressive than the 2015 release, but I for one make a note in my calendar to come revisit Cardrona in 2025. I think this one has a bright future, considering the taste sensation it already offers at such young age.