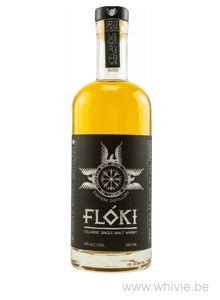 According to legend, a Viking ship sailed from Norway in search of an island from the fables. This is 868 AD and the leader was the fearless Hrafna-Flóki, who had three ravens with him. The birds led him to an island that Flóki immediately called Iceland where he settled. Founded in 2009, Eimverk Distillery names its whisky after this fearless Norse man. I first tasted this young malt in 2016 and wasn't exactly impressed. Let's see what progress they've made in five years.

The nose is bursting with grain and wood. Raisin bread, speculaas, gingerbread and some grass. Walnut liqueur. I confess, not much has changed. And I'm not impressed with this nose either.

The mouthfeel is good, but besides some raisins and a fresh fig, there is hardly any fruit here. All the more grain. Breakfast cereal although sprinkled with all kinds of wood spices such as cinnamon, nutmeg and cloves and soaked in some dark honey. A little alcoholic.

The finish is mild, relatively short and somewhat drying.