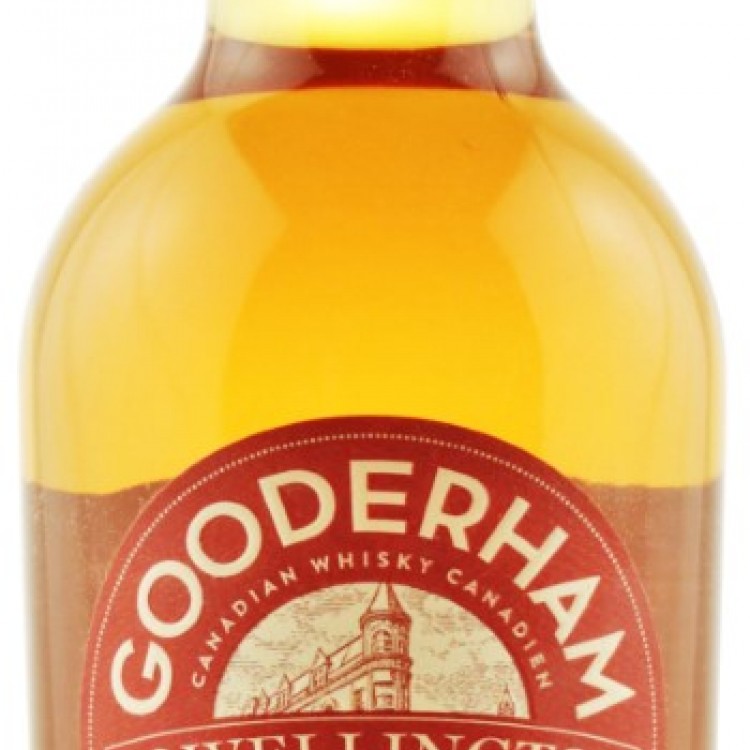 I'm finally getting around to last year's Northern Border Rare Collection edition of Gooderham & Worts, called 49 Wellington, commemorating the landmark Flatiron building at 49 Wellington St. E. in Toronto, which was the head office of Gooderham & Worts back in the day. It is a four grain blend of barley, rye, corn and red winter wheat whiskies, with red oak staves hanging out in the barrels during maturation. Of course, it is bottled at 49% ABV.

The colour is a pale gold. There's a tannic note on the nose, with plenty of rye spice, nougat, green banana and peach. Herbal. The requisite caramel and vanilla. Lots of dark honey. Noses dry and dusty, even more so with water which gives it a yeasty quality. Much like the Candians of old.

The finish is medium-length, more red apple, some paprika and oak. Very well done (especially the nose) but if memory serves, not quite at the level of last year's Eleven Souls release - let's compare side-by-side now. The Eleven Souls (also 49% ABV) is a shade darker; the nose is spicier and more herbal; the palate nuttier, creamier and with more oomph. Compared to the standard G&W Four Grain? Rougher on the nose than both the 49 Wellington and the Eleven Souls, but sweeter on the palate, with a bitter finish. It is not as well balanced as the other two (though it deserves a higher score than I first gave it some years ago). This is the last of last year's Northern Border Rare Collection for me to review, and it is unfortunate that overall it is the weakest year so far. Though none are terrible, they are certainly not up to par, given that this is supposed to be our version of "BTAC"! Is it true that the release is cancelled this year? If so, that is a shame, though understandable. Let's hope future releases reach higher.

@talexander The word was that Dr. Don used Wiser's Red Letter as one of the blending componants. You have reviewed Red Letter in the past. We're there any Red Letter notes or did the use of red oak and other grains completely transform the Red Letter profile?

@fiddich1980 Unfortunately, I can't recall - the last time I had Red Letter was probably when I reviewed it seven years ago!