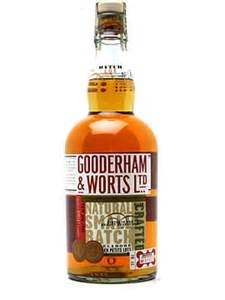 This bottle was a delightful surprise from @paddockjudge. I don't know too much about it, except what I gleaned from @newreverie's review of this. He mentioned that it was produced around 2011 and is a blending of only 10 barrels. I believe it was bottled by McCormick's distillery and available only in the US. This one is Bottle No. 27510. If @paddockjudge or @newreverie have more info to import, I hope that they do!

The colour is a medium gold. On the nose there is a lot of honey, vanilla and light caramel. Beyond those dominant notes, this is very floral, herbal and grassy - with a "fresh rainfall" quality I can't quite put my finger on. Not as much rye as either of the 1832 Decanters I reviewed, but a bit of that rye spice is still there. Dark chocolate. Candy floss. Star anise. Pralines. Even more floral and herbal with water. Very complex with a lot going on, but a touch on the sweet side for me.

On the palate the sweetness is tempered by peppery spice and toasted oak. Lighter honey and caramel, with more vanilla and marzipan. Milk chocolate. Creamy mouthfeel. Slightly spicier, and a little malty, with water. Quite delicious and a real pleasure to drink.

The long finish is sweet and buttery with mild spices. This is very tasty stuff, though slightly on the sweet side for me. But the notes are similar to the 1832 Decanters - especially the 1950. That particular bottle leans on the honey and caramel notes very similarly to this Small Batch #4. As nice as it is, it doesn't quite compare to the 1948 decanter, which has perfect balance between all the elements. Funny, even though it's designed to be like them, the current Gooderham & Worts Four Grain isn't really like any of these three at all.

For reference this is from actual G&W stocks. I do not believe the four grain is actually from real G&W juice. I have no idea how old it is, but the distillery closed in the 90s. Unknown if this was in wood or steal prior to bottling.

I'm surprised you didn't pick up any smokey notes in this. Mine, (And I've had 3 bottles and have 3 more unnoppened) has a very nice Smokey note much like your 1948 has a lovely layer of smoke that pulls in some nice scotch notes.

Perhaps your 1948 is on a whole different level than this but I am certainly happy with my bunker of GWSB4 bottles. I'm glad you enjoyed this and I hope some if the others here get to try it.

@newreverie Correct - the current G&W Four Grain is distilled at Corby's, and is designed by Livermore to be "similar" to actual G&W whisky. I haven't done a side-by-side with that one yet, but from my tasting experiences over the last few days and my memory of the Four Grain, it isn't that similar at all. To your point about the smoke, yes that was there. Sometimes when I'm writing (especially at night when I'm already a little tired) I don't register every single note that is there, although I know I should! Also, Pam was watching Bridesmaids, which was distracting. So her fault. :-P

The flavor difference between the two G&W bottles was pronounced.

@newreverie I would mostly agree with your ranking, except I'd put the Legacy closer to the top.

@talexander My opinion of Legacy has always been rather mixed. It is a great value buy for me because I can get it for ~$30, but it just doesn't suite my palate in terms of what I look for in a Canadian Whisky. It isn't enough like a straight rye for me to sip on it when i'm in the mood for rye, nor is it enough like a CW. I prefer my CW on the sweeter side so long as that sweetness is tempered with great depth like this GWSB4, Wisers 18, or Alberta 25/30. If I want something a bit spicier, i think Crown Royal Single Barrel is closer to my tastes. It also costs about the same as Wiser's Legacy.

@newreverie, @talexander, it never ceases to amaze me how preferences differ from one person to another, not only when considering this particular group of Canadian whiskies, but for all styles across the flavour spectrum.

Recently I sat with @Nozinan, @Maddie, and @Victor where we sampled a long list of spirits. There were many times when we agreed on particular aspects of each whisky; however, there were times when we individually placed emphasis on particular traits of a whisky that were not emphasized by others or not recognised at all by some. In particular was a 16 YO Glendronach SC that @Victor and I found to be sulphur tainted while the rest of our group did not.

Yesterday I sat with my brother-in-law, an educated man and one who enjoys whisky. We sampled a wide range of Canadian whiskies over the course of a few hours while catching up on family news. Near the end of our session he revealed to me that Alberta Premium 25 was a lovely whisky and we don't drink it often enough. He commented about Wiser's Legacy batch L16175 being one of his favourites of the night, right behind his top pick, AP30, followed by Masterson's French Oak Single Barrel #F2-033, AP25, Masterson's 10 YO batch 005, Highwood 20 YO pre-flood batch, Lot 40 batch L16042, Canadian Rockies 21 YO batch 001, Danfield's 21 YO, and Lemon Hart 151 proof rum. Not quite the way I would rank them, at least not yesterday.