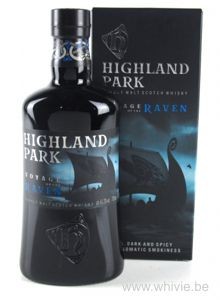 ‘For our Viking Ancestors, the raven was a powerful symbol of victory in battle, success on a voyage and loyalty to the God, Odin’. Hello? This next NAS-expression to be concocted in the Highland Park labs? It does come in a beautiful box and distinctive bottle though. That may sound somewhat harsh, but I am no longer the HP fan that I used to be. Too many ‘marketing whisky’ to my taste. Hopefully this one is a good one. It is bottled at 41.3% which is somewhat surprising.

Nicely oily and surprisingly spicy on the palate. Think nutmeg, vanilla and ginger. The vanilla is even quite loud. Then the fruit – which works hand-in-glove with the peat smoke – turns somewhat dark. Blueberries, dried peach and a lot raisin. Midpalate, the oak does give it a bitter touch. Not bad, but not top either.

The finish is medium long, a touch spicy and drying.

Well, not bad, but I do expect a little more complexity from HP and this one lacks in that department. You will cough up 60 EUR for this (not me, though). And if you wonder what the hell the title is all about: it’s the two ravens (Though and Memory) that were the eyes and ears of Odin according to the Norse saga. Nuff said.

Sorry - that shoud be Highland Park and not Highland Malt - apologies.

@markjedi1 - I do like your reviews, always informative and you don't pull any punches (or swing the axe idly as the case may be).

I like the 12 but have found the quality to have taken a slight dip the last couple of times I've tried it but not had any other offerings. They seem to be rolling out gimmick after gimmick without the quality necessarily holding up which, to be frank, is a bit off-putting for someone like me who isn't particularly taken one way or the other with the distillery.