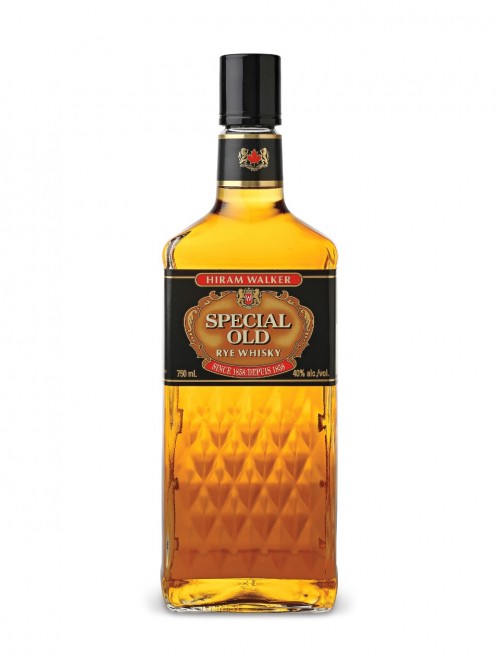 This is an abridged version of a blog post

Hiram Walker Special Old is made, unsurprisingly, at the Hiram Walker distillery in Windsor, Ontario. It's been around forever and the bottle and label probably haven't changed since the 1970s. I may be suffering from the Mandela Effect, but I'm sure I remember this bottle of rye from family Christmas parties in the early 1980s. Packaging shouldn't affect how a person feels about a product but it does. Some might be put off by the square bottle with the diamond-patterned indents and the retro label, but I love it. I hope they never change it. Maybe it's some kind of residual emotional attachment to the early 1980s, a time when my life consisted of He-Man action figures, Star Wars movies, and X-Men comic books. Ok, so this looks like something your grandfather would drink. Maybe it was the rye of choice for your lovable, if somewhat politically incorrect drunk uncle. But how does this "budget" rye whisky taste, sans the ginger ale or Coke?

This whisky benefits from a few minutes in the glass to properly open up. The nose is definitely its strongest point. Adding water only mutes the nose and makes it feel much too watery. I preferred this one neat. Even a modest bump up to 43% ABV would do wonders for this whisky.

A few years ago, before IPAs started flooding the market, Pabst Blue Ribbon became the beer of choice for hipsters. I can picture Hiram Walker Special Old enjoying the same popularity surge as PBR. It's got a great retro look, and it's a much better whisky than its bottom shelf price suggests. Those who drink their rye with ginger ale or cola probably wouldn't notice much of a difference, but this is a really good sipping whisky, provided your bottle is from a good batch.

@OdysseusUnbound, thanks for your fun review. I think that you capture Hiram Walker Special Old Rye Whisky rather well. "Dusty" is indeed the operative word. For me, "dusty" is never a good thing.

And the idea of Hiram Walker Special Old Rye Whisky ever becoming the choice of hipsters just about made me laugh out loud. I would enjoy living in such a world. I would be laughing all the time.

I really wanted to like my bottle of Hiram Walker Special Old Rye Whisky. I just could not do it.

@Victor Perhaps it’s another emotional connection, but “sawdust” is a very pleasant note for me. It reminds me of my maternal grandfather’s garage/workshop. I loved going into the garage as a boy. It was massive and always smelled of sawdust, gas, and motor oil. I can see how many people wouldn’t like this aroma/flavour though.

Dusty sounds good to me!

Sawdust sounds good to me!

Huey Lewis and the News does not sound good to me.

@MadSingleMalt Oh come on! Hip To Be Square was brilliant. Ditto for I Want a New Drug.