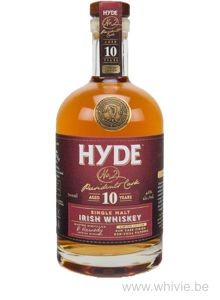 Last time I tried a Hyde whiskey was way back in 2016. That was 10-year-old President's Cask No 1. Now the president's second cask is in my glass, finished on rum barrels. It is still not clear to me where Hyde gets his whiskey from, because they do not have a distillery themselves. Hibernia Distillers buys its whiskey elsewhere. Is this Bushmills? Cooley? Midleton? Who's to say? Fun fact: Hibernia is the Latin name for Ireland, used at the time of the Roman Empire.

Good body, spicy on nutmeg and cloves with a hint of oregano. That precedes a beautiful fruitiness that mainly consists of pineapple and strawberries. Hint of raspberries and hazelnuts. Another drop of honey. Very round and rich. Ginger and some saffron now. Beautiful, though!

The finish is sweet and spicy, medium-long and slightly bitter on the deathbed.

This was not too bad for me. If I were to venture a guess, I would say Bushmills, but that's not at all certain, of course. Thanks again, Benny.