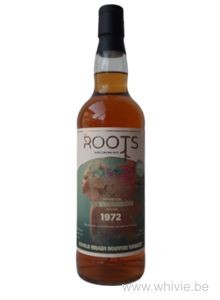 A new Belgian bottler has emerged: The Roots. But Joren Nuyts, the sympathetic guy behind this new brand, will not limit himself to whisky. We can also expect other spirits, he told me. And he immediately put his money where his mouth was, because his first release concerns triplets: a Scottish grain, a very old cognac and a solid rum. What? The first release is not Scottish single malt? Gutsy! I immediately put those triplets on the lips, curious as I am. I start with the grain, an Invergordon of no less than 49 years old, distilled when the undersigned was a toddler of 2.

Delicious nose on yogurt with peach, coconut milk, vanilla custard, Quality Street caramel bonbons, pencilshavings and orangettes... but also a big whiff of varnish, as you often encounter with grain. Corn on the barbecue, hint of unripe banana and marzipan. Cotton candy and farmer's butter. Very fascinating nose that could entertain me for fifteen minutes.

The body is oily, bordering on creamy. Very sweet. Of course, I would almost say. But also a bit spicy, which makes it exciting. Cloves and cinnamon, white pepper and cardamom. And in terms of fruit, I have to think of banana, orange and baked apples, but from the second sip on it becomes really interesting. Then it even flirts with some tropical fruit and gets a fresh lift of menthol. Hint of candied ginger and cold coffee. What a beautiful grain!

The finish is really the cherry on the cake. Medium length on caramel, woodsmoke and a nice slightly bitter and drying end. It leaves my mouth semi-dry, longing for another sip.

Fantastic Invergordon, really. And I continue to find it amazing that I was two years old when this spirit dripped from the column and was put in a barrel and I get to put it on the lips half a century later. Delicious. Count on 390 EUR.