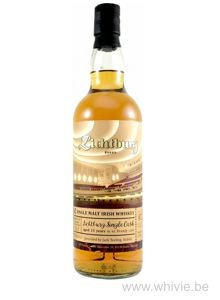 Rolf Kaspar is a German independent bottler that already has a lot of Irish whiskey on their resumé, including a 15-year-old malt bottled in honor of the Lichtburg, a historically significant and protected cinema in the heart of Essen, which opened its doors in October 1928 and also played an important role for the German propaganda machine during the Second World War. That Irish whiskey matured in a former Armagnac cask. This second release, also 15 years old, matured on a former Brandy cask and was delivered, according to the label, by Jack Teeling from Dublin. Ha! That Brandy Cask has already left his mark on the nose. The first time I stick my nose in the glass I think I'm sniffing a well-matured grappa. Then lime and green grapes follow each other at a rapid pace, followed by vanilla and gooseberries. I honestly expected it to be a little more tropical (or was that vain hope?).

It is beautifully oily and delivers a lot of tropical notes in terms of taste. Orange, apricot, lime and again grapes. Some pepper and licorice keep it nice and warm. Midpalate I get a touch of white chocolate and vanilla.

The finish is firm, almost spicy, and quite drying.

Beautiful Irish, but it can't match it’s predecessor by a long shot, as far as I'm concerned. Thx, Benny!