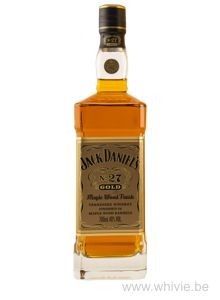 Jack Daniel's needs no introduction, of course. Its Old No 7 is one of the world's best-selling bourbons. Well, yes, Tennessee Whiskey I should actually say, because it is filtered over charcoal from the maple according to the so-called Lincoln County Process. But in addition to the Old No 7, there are some other expressions, such as this Gold No 27 that got a Maple Barrel Finish. Maple is a deciduous tree that also grows in our regions. It had not tasted this one since 2016. I then called it 'toothless'. Wondering if it has gone through any evolution.

Walnuts, chewing tobacco, raisins and nougat, that's the nose of this Tennessee Whiskey in a nutshell. In addition, but to a lesser extent, something that reminds me of rum, as well as some popcorn. But all very mild, I must confess.

The finish is rather short, soft and sweet and slightly drying. Popcorn and walnuts return to the deathbed.

It is as I remember it. Pleasant, better than the Old No 7 (that doesn't take much), but unfortunately too expensive for what you get, in my opinion.