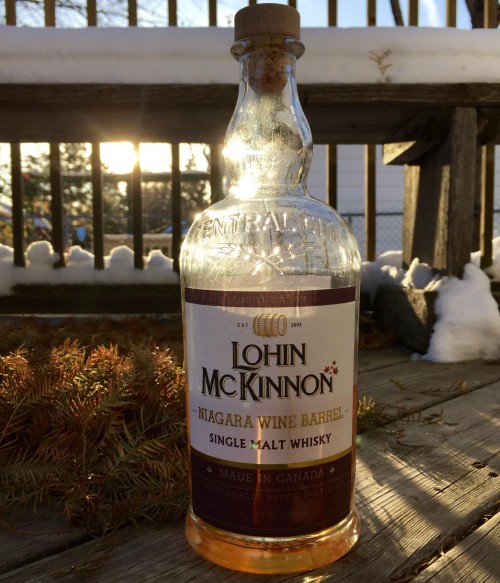 Lohin McKinnon is a brand released by Central City Brewers & Distillers in Surrey, B.C. Founded in 2003, they started making beer under the “Red Racer” name. In mid 2013, they started distilling as a combined effort between Gary Lohin (their brewmaster) and Stuart McKinnon (their master distiller). McKinnon, who trained and learned the craft of distilling in Scotland, brings a wealth of experience and knowledge to his work here in Canada. Using a brilliantly crafted distillers beer of pale barley malt, by Gary Lohin, he produces some very innovative spirits, one of which I’ll do my best to describe here! This is a sample taken from a half empty bottle. Being that the bottle is only a week old, this has had ample time for opening. Also, the notes taken are from a neat pour in a Glencairn.

Lohin McKinnon's standard single malt is produced in batches of 20 barrels at a time. This release is a vatting of two ex-merlot barrels...that is a very small batch! These barrels come from an undisclosed Niagara winery…trust me, I tried to find out, but being that this was not a collaboration, the winery couldn’t be disclosed. The colour shows some significant barrel influence compared to the standard single malt (which I’d call a pale straw) this, on the other hand, is nicely tanned with a copper hue. There is no colour added, as confirmed by my emails with McKinnon. They do chill-filter as a general rule unless the whisky is released at an ABV of 46% or higher. Let’s look at viscosity. As this is rolled around the glass, it hangs on, legs take time to develop and when they do, they roll down VERY slowly. Interesting, definitely inviting...let’s see what we find.

Nose: You’re immediately hit with the wine influence. It doesn’t hide or play hard to get. While it is youthful, it is not overly harsh but the edge is there. Up front and centre, the wine finishing greets you at the door, then there is more underneath. A malty sweetness, with an earthy quality. Once my nose adjusts, I get dry grass, which is for me, a trademark of Lohin McKinnon, I tend to get it throughout their lineup. Also, You can smell something akin to “old” wood…don’t read antique wood or old furniture, ’cause there’s no varnish or wood polish here. More like a sturdy barn of timber frame, built and weathered. Along with it comes the old dusty wine presses, and wooden farm implements that haven’t seen daylight in many years. I’m not saying they used old casks, but there is some funk here. I like it, very nice. There is also a fruit element that presents as green apple...interesting.

Palate: On first sip, the wine is again front and centre. It is tannic and edgy. At first, the sweet barley sugars hide beneath unnoticed, but soon those reappear. This is caught somewhere between sweet and bitter/sour. The essence of grapes with green apple skins. It tends to sparkle a little on the back corners of the tongue, I like that. Hold this on the palate for as long as you like, the flavours seem to remain stable, linear, but then upon swallowing, there is a new introduction…earth, dried leaves, nutty wood. It’s different, and takes a bit of time to adjust. For me, the finish is the star of this show. With time in the glass, it tends to sweeten…a sugary base develops as the other flavours start to thin. Consume this one within 45min to an hour.

The empty glass gives off a jammy scent tempered with something like a spent match, I’m told this may be the result of sulphuring the barrels. I’ve never been sensitive to sulphur so it can pass me by unnoticed, but I’d be interested to hear from someone who is.

I’m a big fan of Lohin McKinnon’s base single malt, and as such, I find this to be a worthwhile experiment. I wouldn’t call this the best in their range, but it provides a distinctive experience, and an education in whisky that is hard to find elsewhere. I’m always appreciative of a transparent whisky like this! It’s open, laid bare if you will…and this is remarkable in today’s whisky landscape, something to be applauded.

Well done Central City! Keep throwing these experiments at the wall, and we’ll happily tell you what sticks!