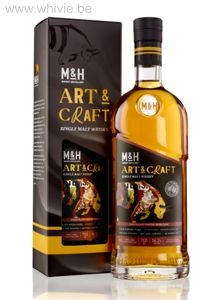 The Milk & Honey Distillery from Tel Aviv, Israel, has just released four new releases in the so-called Art & Craft series. It concerns four releases of their malt that has matured on special beer casks! And this time it's a chocolate porter beer cask! A porter is a dark beer from London from the 18th century from brown malt and quite a bit of hopping. It was named porter after the many street and river carriers of that time. The beer is related to the stout. All this aside! The chocolate porter leaves little to the imagination: it is a beer brewed from chocolate malt or heavily roasted malt. I confess: no idea from which brewery the barrels come, but assume that it must also have been an Israeli brewery. Let's get a taste.

Oh, that first sniff was a bit of a shock. Big earthy touches and a bouquet of dandelions and vase water... and it takes a good minute before this makes way for sweeter notes that I associate with both whiskey and dark beer. But slowly some dark fruit appears, caramelized chicory, cold coffee and caramel. Some chocolate shavings. It gets better by the second, so: pour it and put aside for five minutes. It's a time bomb.

On the palate it is indeed immediately spot on! Young malt with a lot of wood spices and a serious kick of the alcohol which makes it a bit boozy, but immediately nicely supplemented with notes of fruit (apricots) and orangettes (my favorite candy). Caramel, mocha and a hint of vanilla are slowly but surely surrounded by a beautiful bitterness like walnuts and chicory.

The finish is long, drying and becomes a bit astringent towards the end. I feel the urge to let a sip of water follow.

I'm sure Shilton, that crazy ambassador who recently joined our friends from Tel Aviv, will be able to appreciate this one, beer lover as he is. In conclusion, I think I can say that the Art & Craft series is a nice addition to the range of M&H, but in the Apex series I have tasted better things (such as the unparalleled Dead Sea). But as an experiment it certainly succeeded!