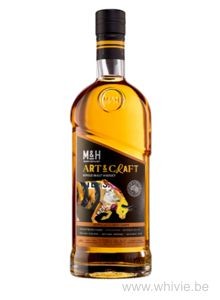 The Milk & Honey Distillery from Tel Aviv, Israel, has just released four new releases in the so-called Art & Craft series. It concerns four releases of their malt that has matured on special beer casks! In the glass is the Doppelbock Beer Casks release. A Doppelbock beer is half a meal, to be honest. It is a derivative of the 'regular' bock beer (also called bokbier) that was actually brewed to drink (by the priests!) during Lent. That says it all, I think. This comes from M&H barrels that were loaned to the Haaretz Brewery, housed in a kibbutz near the Negev Desert. After the maturation of their doppelbock they went back to M&H who let this whisky mature on it for 4 to 6 months.

The nose is sweet and reminds me especially of candied fruits such as pineapple, orange and mango. Relatively creamy. Aromatic. Caramel. Toffee. Cotton candy. A tad sweet. Pleasant.

On the palate that sweetness comes back immediately, but the fruit becomes a little brighter. Think apricots and peach next to juicy blood oranges. A soft pepper gives it a big kick. There is also something of green wood in it. Comes across as young – and of course it is – and a bit sharp. And yet it does not need water.

The finish is medium-long, spicy and towards the end a bit astringent.

Here, too, I am of the opinion that the nose is not matched, let alone surpassed, on the palate. But it is certainly pleasant.