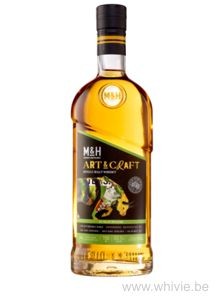 The Milk & Honey Distillery from Tel Aviv, Israel, has just released four new releases in the so-called Art & Craft series. It concerns four releases of their malt that has matured on special beer casks! Now I'm trying the one on Ex-Islay IPA casks, which at first I thought came from Islay Ales, the only operational brewery on Islay. But no. They are former Islay barrels on which their single malt first matured for the Elements Peated release and then sent to the already defunct craft brewery The Dictator in Jerusalem. They then matured their very last beer, a peated IPA, for 6 months before returning the barrels. M&H then put spirit on it that matured for about three years. Hence Ex-Islay IPA Casks. There were only three of them, which explains that only 811 bottles of this liquid were bottled. Let's get started!

The smoke is immediately present on the nose, but does not dominate. I mainly get yellow fruit with unripe banana in the lead, followed by quince and a hint of young pineapple. There's also a subtle hint of rubber in it, I have to say. It doesn't bother. Lime and grapefruit provide a sour note and some bitterness. Wet rocks. A sandy beach. As it has breathed a bit, it even becomes quite maritime. I like it.

It is surprisingly soft on arrival and now I have to think of a peaty whisky at first. Well, it actually is, of course. Ardmore, Ledaig or Caol Ila, take your pick! Limes first and foremost, immediately followed by pink grapefruit and some candied ginger. Soft wood spices. The smoke development is not exactly large and yet the peat is unmistakable. Fairly herbal, but very tasty.

Only in the finish do I think I recognize something of an IPA beer. But that can no longer spoil the fun. The finish is sweet, sour and bitter at the same time as a large portion of peat that reverberates for a long time. Makes you long for a second sip and that is always good news.