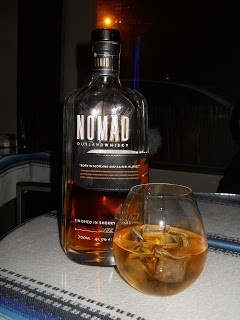 Master blender Richard Paterson joins sherry bodega González Byass to produce this blended. They start by mixing over 30 young scotch whiskies (between 5 and 8 years old) and ageing them for three years where they were born: in Scotland. After that, they're shipped to Jerez de la Frontera, in Andalusia (Spain), to spend one more year in Pedro Ximénez (PX) casks (botas) in the bodega.

First, a reminder: PX is a very sweet, rich and dark dessert wine that comes from raisins rather than grapes. After being late-harvested, the grapes are exposed to the sun in straw mats in order to make them lose moisture and concentrate sugars. So, all things considered, saying that a PX smells of raisins is more or less like saying that a wine smells of grapes.

Okay, now let's go to the review. I had this back in Nov 2016 and have never had it again. Lucky me I wrote down my tasting notes back then and only have to type them here now.

A dark golden to amber pour yielding sweet aromas coming from the PX cask. Of course, as already mentioned, raisins; there's also toffee, vanilla, caramel... But not only: in the background you might spot sandalwood, breakfast cereal, conifers and a hint of smoke.

When the sip begins I must say this is a little bland, lacking strength, and much too sweet. Midpalate it gets somewhat more powerful, showing nice umami and metallic tinges, but to my dismay the finish is another letdown, short-lived, devoid of creamy tannins or personality. The nose wasn't that bad, but mouthfeel and finish are disappointing.