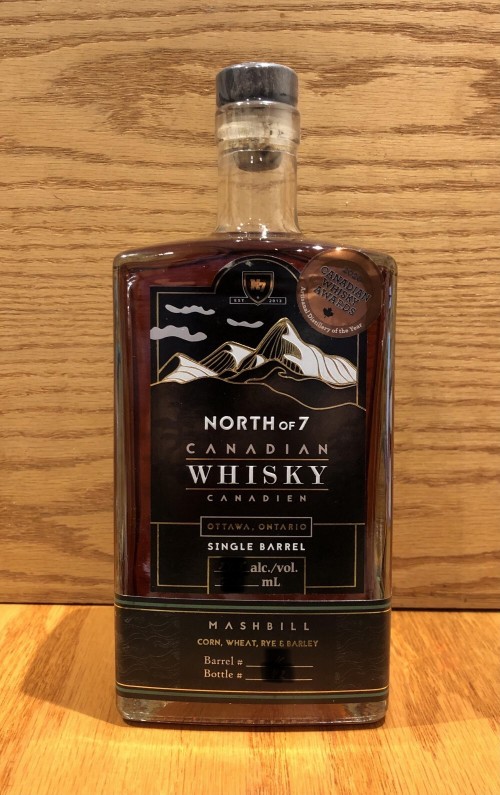 This is my second review since getting shut down by COVID-19 in May. It’s only the third whisky I have tasted. The second was the entry level (40%ABV) 4-grain N7 from my previous review posted just before this one. I was hoping to post this on Canada Day but my smell and taste were not there yet.

This is my friends’ second completed private barrel pick from the distillery. The first I reviewed for Canada Day 2021. I say “completed” because when we chose the first barrel we also picked a rye barrel for future bottling and it is still aging. The mashbill is 70% corn, 25% rye and 5% barley. It’s served up at cask strength. I was not involved in the selection of this cask, but I do have a bottle of it coming to me eventually. This review is of a sample (bottle 137) courtesy @Cricklewood.

This expression is reviewed in my usual manner, in a Highland Whisky Glass, allowing it to settle after which I take my nosing and tasting notes, followed by the addition of a few drops of water, waiting, then nosing and tasting.

Very subdued for a CS whisky. Covered I get a hint that it is whisky and a strong whiff of alcohol nipping at my nose hairs. On further exploration it is very much a bourbon on the nose. It has that classic Dr. Pepper dark cherry cola essence (I don’t like Dr. Pepper but on a whisky nose I don’t mind it). In all a fairly weak nose.

With water the nose does become a little stronger, with an emphasis on its bourbony nature. The cola becomes slightly carbonated. (21/25)

Wow! I was not prepared for that (such a soft nose). Bold arrival. Sweet. Fruity. Very spicy. Hint of cola but less of the cherry than was suggested by the nose. Pleasant to sip even at CS.

Water enhances the cola flavour. It is a little effervescent. Different. But not better or worse.

The nose does not predict the taste at all. The flavours are bold but well-balanced. Slightly unidimentional. With water the balance between nose and palate are restored somewhat but the flavour profile becomes more narrow.

This is very much, as @Paddockjudge would put it, a bourbonne. I prefer the nose with water but the taste neat.

Head to head, after tasting this, the entry level bottling doesn’t stand a chance.

@Nozinan thank you for your review.

Bourbon mashbill? Check! That would be a "high rye" content bourbon mashbill. Next question is "what was done with the oak"?. New oak? Reused oak? Charred? Toasted? All of it matters a lot. If bourbon it would all be new charred oak. Since Canadian it could be a combination of new and used oak and some of it could be new and charred and the rest used oak. Or it could have been aged in used oak and "finished" in new charred oak. Or it could all have been aged in used oak. The used oak could all have been first refill barrels or multiple refill barrels. It would be interesting to know just what they did with the oak.

It's also not too surprising that this 58.5% ABV whisky has more flavour than does the 40% ABV whisky by the same producer.

My own experience has proven to me that noses and palates often do not correspond strongly. My opinion of those, often Scottish blenders, who claim that the nose sense dominates the taste experience is that those who think that simply must not have a very good or a very strong sense of taste. Apparently they can smell it well, but not taste it with much perception, so they project what they smelled onto the sense of taste. I see no other way of understanding how they can assert that the nose dictates what you taste when, to me at least, that is quite often not the case.

@Victor, 58.5% abv, three grain mashbill, and yes, definitely high rye at 25% of the bill. For me there is too much rye in this style of whisky. Yes, I did say that. Having tasted a magnificent four grain release from this distillery, I know they can make the four grain mash bill work very well.

This particular CS release was my third favourite of four bourbon-mash--bill barrels offered to the group. At the time of selection I liked this one, but preferred two others ahead of it.

I scored this 88/89, a solid pour. As the bottle evolves the score increases. I am holding a bottle for @Nozinan. Hopefully his organoleptic senses will have fully recovered by the time I deliver the bottle to him.

Thank you @paddockjudge and @Victor for your insight. I didn't have much background info on this particular expression and this helps to put my review in context.

Wait, you don’t like Dr. Pepper? I’m speechless. I don’t drink pop (or soda if you prefer) very often but Dr. Pepper is one of my favourites. I actually enjoy using it as a mixer for bog standard JD No 7 or JB White.