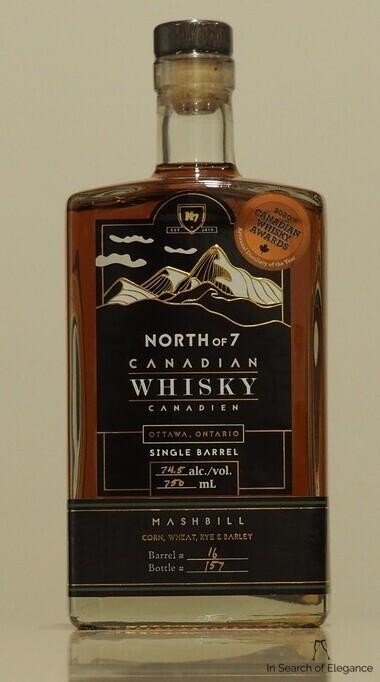 In the past three years, I’ve made a special effort to taste whiskies from as many of the micro distillers in Canada that I can. I think I’m up to 35, a small number still, but that’s a fair number past the Big Eight Canadian distillers (7? Forty Creek isn’t actually that big…)

One of the secretly best bottles of whisky from micro distillers (in my opinion) is North of 7, from Ottawa (where I reside). By my assessment, it’s in the “second tier” of micro-distillery whisky. It’s below the tier of Two Brewers and the best of Shelter Point (which I think represent some of the best whisky in Canada). It sits on the next tier without a lot of company – some whiskies from Last Mountain and not too many others. There's a drop off from there, to date.

I wondered if I was hometown-biased so I sent a bottle of Barrel 5, the first barrel that I really was impressed with – to @paddockjudge. He helped me realize I wasn’t crazy.

North of 7 distillery is a small distillery in Ottawa – they only produce one barrel a month of whisky and rum is their best-seller. They source their casks from independent stave company in Kentucky/Missouri, the company that most of the big bourbon companies use. They make 5 whiskies. 3 come in heavy-char barrels: a 95% rye, a rye-heavy bourbon-style, a wheat-heavy bourbon-style. They also make a four grain whisky matured in new oak (heavily toasted, lightly charred) and a single malt matured in ex-four grain casks. To date, their four grain is my favourite.

I asked the owners if I could select and buy a cask with some friends. Surprisingly, there was enough interest for two casks. In fact, so we selected one to bottle now and one to bottle in the future at our discretion (we get to taste from it every year). This was done from a selection of 10 casks ranging from 3-5.5 years of age and including all 5 recipes that the distillery makes. They certainly accommodated us – this was the first cask selection the distillery did. @paddockjudge, @nozinan, @cricklewood and @odysseusunbound were among the participants.

The selection was a marathon – we tasted all 10 casks at 20%, 45%, and then cask strength (30 evaluations of 1/12 oz samplers). There were in-person tastings in the warehouse and a virtual one for out-of-towners, and everyone got a vote based on the number of bottles they committed to purchase.

We selected a rye to age that is currently approaching 4 years old. Of the 10 casks we tasted, the overwhelming winner to bottle now (over 50% of first place votes) was cask 16: a four grain whisky, 5.4 years old, at a cask strength of 74.5% (!!!) and costing only $70. Excellent value, I must say for what we got.

What does it taste like? If you really want to know, I hear @paddockjudge is active on the black market.

But in absence of that, here are my tasting notes. I find 74.5% too much heat for the richness of the whisky – my favourite spot is the high 50s with this one. The proof is pretty nuts. To get down to about 45% (respectable!) you are adding 2 teaspoons (10 ml) water to 1 tablespoon (15 ml) whisky. To get to 56% (close to my sweet spot for this one) you are adding 1 teaspoon (5 ml) to every tablespoon (15 ml) of whisky. A dilution rate of nearly 30% extra water to your whisky still lands you nearly at 60%!

One thing that I like about these four grain whiskies is that each barrel often seems to highlight the four grains separately – some are more rye-focused, some wheat, some malted barley. This one is a bit more rye-dominated.

The nose is rich and oaky, with dried apricot, prune, caramel, hazelnut, milk chocolate, stale cinnamon bark, vanilla, corn oil, dried corn husks, wintergreen, incense, dry rich earth (with lots of organic matter), dried mint, baking white bread, and dill. It noses closer to a bourbon than a blended Canadian whisky, but it isn’t too close to a bourbon particularly because of the heavily-toasted but lightly charred cask. The oiliness is fantastic. The palate has lots of toffee, but is balanced with a spicy grassiness, clean corn, oak, brown cardamom, and clove on the finish. A fairly big finish, with a nice balance of buttery sweetness, oak, and dried hibiscus flowers. Pretty spicy, too.

I’m thrilled with the selection. @paddockjudge @odysseusunbound @nozinan @cricklewood – any thoughts? will you post a review?

There is a distribution posted for my ratings at the top! Amazing. Go connosr.

Great review! I don't know that any subsequent reviews of this expression could do justice to it the way you have. I won't be getting my bottles for quite a while as they are currently either in Ottawa or Sudbury, but I will be opening one when they do finally arrive, and a review will likely be forthcoming. Perhaps, a layperson's perspective.

It was a privilege to be involved in the cask selection process.

I had my first dram of this last night and I agree that the bottle proof is a bit too hot, even for me. I took it down to the low 50% range and it was terrific at that proof.

I'll echo @Nozinan any review we do won't likely do it justice but I'll get around to it.

I hesitated between this one and cask #13 which while a bit too tannic had a depth I loved.

It is drinkable a full proof but much more enjoyable with a bit of water, I haven't had too much of it yet but I like how the character shifts around, the toasted grain notes show up more on the finish than upfront which is a nice change.

So so do we get to do one of these every year?