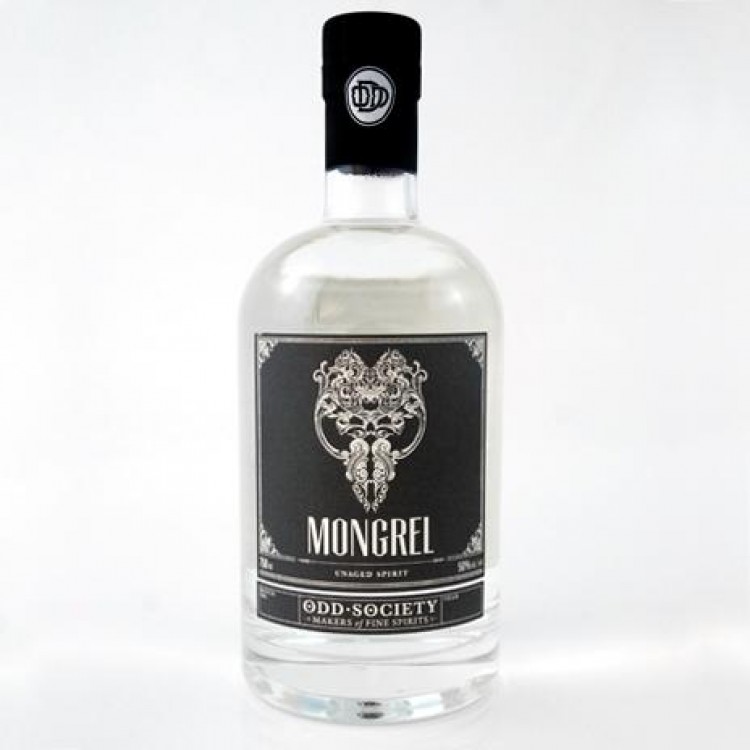 As you may know (I hope you do!), this year marks Canada's 150th birthday - so what better way to celebrate than to drink (um, I mean taste) various Canadian whiskies, leading up to Canada Day on July 1st? I've stocked up a pretty wide range of stuff you won't see on your local shelves, so this should be a fun journey of discovery for everyone (including me). There'll be a lot here that I bet even Davin de Kergommeaux hasn't tasted (nor @paddockjudge, for that matter)!

Those who know me well know I work for a company called Mongrel Media. So imagine my delight when I found a bottling called Mongrel, from Odd Society Spirits. A micro-distillery in East Vancouver, these folks make gin, vodka and (among other stuff) this unaged spirit (that's right - it's not legally whisky...so I probably shouldn't be discussing it here....oh well). It is distilled from 100% rye grain grown in Dawson Creek BC.

The colour is clear. Spirity on the nose, with hints of toasted rye bread, liquorice all-sorts, freshly cut grass and raspberries. Dusty chalkboard. Lime juice. Water just dilutes the nose. Pretty rough but more complexity than you might expect.

The palate is surprisingly smooth but rather nondescript; it basically just tastes like diluted alcohol (maybe a hint of black liquorice, or a general herbaceous-ness). Slightly creamy mouthfeel. Not much else going on though. A drop of water gives it a spicier kick, so that's an improvement.

The finish has a hint of mint, lemongrass and indeterminate spice. As the label says, this is naked, raw and pure. I don't "like" it, but I don't dislike it either - in fact, it's much better than I would have predicted, and it makes me curious to try their other products, which unfortunately are not available in Ontario (yet). Maybe I'll try making a martini, or a Manhattan out of it? We'll see.

XIII? Is that a metaphor for Canadian whisky reaching adulthood?

Are you going to post the reviews from lowest score to highest?

I'm hoping to fit in a couple of reviews before July 1 and I have one Canadian I hope to post as my 100th review on Canada Day... let's see if you scoop me!

@Nozinan Ha - that's awesome! And no, they are not by lowest-to-highest (I don't think, anyway). Many of the whiskies I will be reviewing, I haven't tasted yet. Twelve more to go...