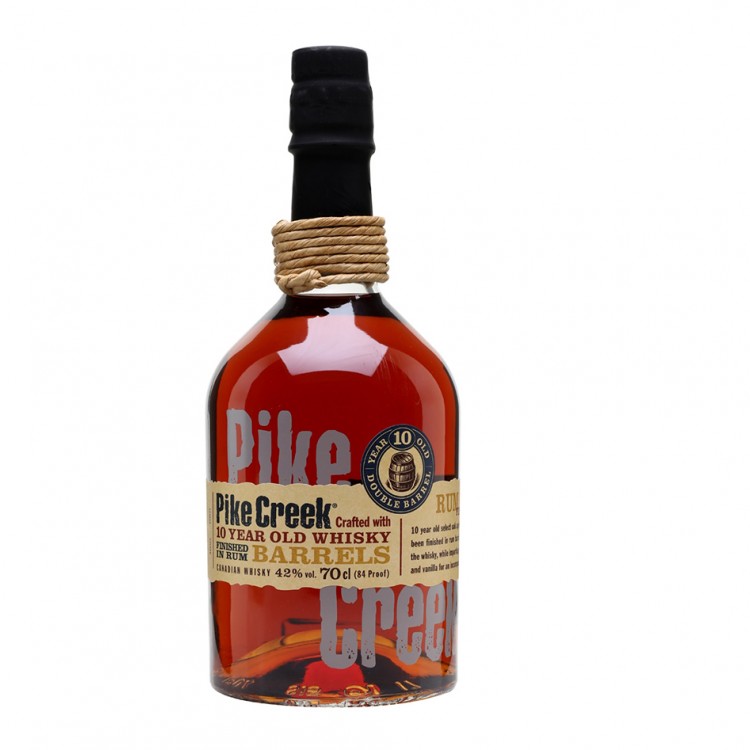 Pike Creek used to be finished in Port Barrels, but I never got a chance to try that version so I can't compare the Rum Barrel finish to the old version. "Whence come the rum barrels ?" you might ask. Well since Corby bottles Lamb's rum at their Hiram Walker facility in Windsor for the North American market, I'm going to take a wild guess and say that the rum casks used to finish Pike Creek were previously used to hold and transport Lamb's rum. Pike Creek 10 Year Old is bottled at 42% abv.

While other reviewers seem to be lukewarm on this release, I have to say that I really enjoy it. Its scoring/placing at the Canadian whisky awards in the past few years suggest a wider than average batch variation with this expression. My bottle of Pike Creek 10 Year Old was reasonably complex, and while the rum finish is prominent, this is no one-trick pony. Perhaps my burgeoning love of rum has biased me in its favour, or perhaps my bottle is from a really good batch. Either way, this bottle has ahem "evaporated" much more quickly than many other open bottles I have. Inasmuch as I try to avoid asymmetrical comparisons, I have to say that anyone who likes whisky and rum will probably enjoy Pike Creek 10 Year Old. And considering it sells for about $35 here in Ontario, Pike Creek 10 Year Old is undoubtedly one of the best values in whisky.