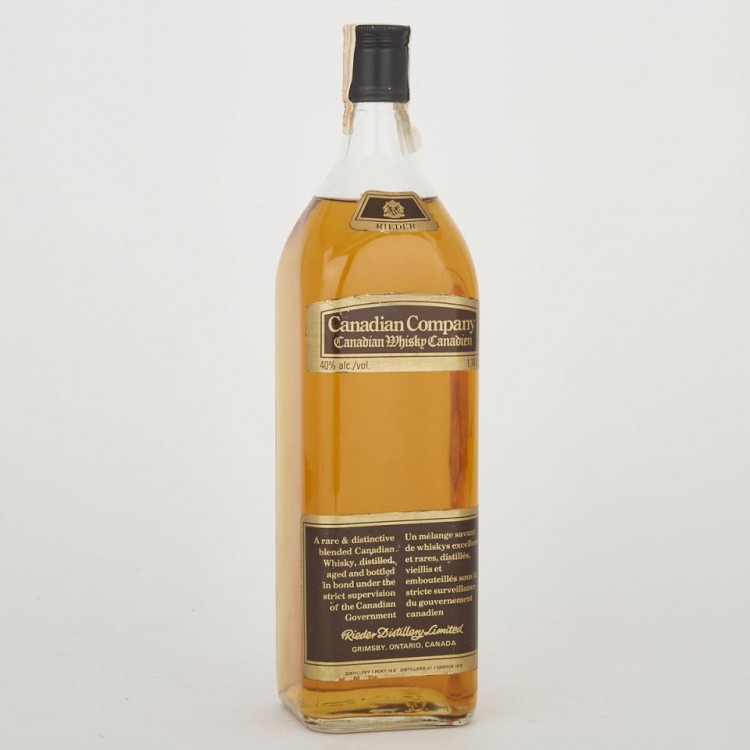 I picked up this 1.14L bottle at the last LCBO/Waddington's auction, and it is rather mysterious. It bears a 1977 tax stamp and is actually called "Canadian Company" (how's that for marketing). It comes from the Rieder Distillery which I had never heard of before....looking closer, the label says they were in Grimsby, Ontario. Exhaustive research (ie. 30 seconds on the internet) revealed that before it was Kittling Ridge Winery (which is now Forty Creek), it was the Rieder Distillery (1970-1994)! Who knew? Otherwise there is no age statement or much other useful information. This bottle has been open for a month or so.

The colour is a light pale caramel. On the nose we have sweet toffee, clove, light brown sugar, clotted cream and creme brûlée. Light milk chocolate. Marzipan. Orange pith. Macadamia. Water brings out some malt and wood smoke. A bit sweeter than most Canadians (if you can believe it), with a nuttiness at its core.

Quite sweet on the palate with Mackintosh toffee, caramelized sugars, baked apple and rye spices. Buttery mouthfeel. Caramel ice cream topping. Roasted almonds. Peppery. Water cuts the sweet toffee and adds a bit more rye spice. If you have a sweet tooth, you'll like it; me, not so much.

The finish is long and spicy with more toffee, toasted oak, black pepper and cloves. There is very little resembling modern Forty Creek Whisky in this, an almost cloyingly sweet mixer, with a bit of spice and nuttiness to give it some character.

Thanks for your review, and journey into the unusual.

Curious. So you've got an entire 1.14 Litres of the stuff to drink, minus the review sample? I'd be looking to trade or gift it.

Which auction was this in? Maybe I’m not looking at the right ones...

Wow, super interesting. I love diving into the history of older bottles.

@Victor Well, such is the journey to discover new whiskies. As they say, you pays your money and you takes your chances. They also say, a fool and his money are soon parted....hmmmmm......

Over the last few months, I've had some here and there (I have found I prefer to review whiskies that I've tried before), so about 1/3 of it is left, which I can keep around for whenever someone else wants to try it.

@OdysseusUnbound I can't remember which one, but it was the last (or second-to-last) LCBO / Waddington's auction. Based on the quality, I overpaid.