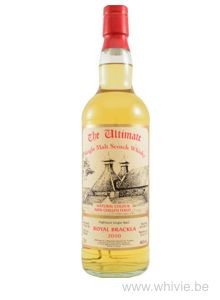 Brackla Distillery is located on the border between Speyside and Highlands, near Cawdor Castle, known for Shakespeare's drama Macbeth. Since 1835, after a visit by King William IV two years before his death, it was allowed to call itself a purveyor to the court and the owner could put 'Royal' in front of his 'Brackla'. We taste a youngster from 2010 that slept for 9 years on a bourbon cask, bottled by the Dutch van Wees in their popular series The Ultimate.

Candy-like sweet nose on coconut, lime, vanilla and cotton candy. And also some lime and something that reminds me of tequila for a moment. After a few more moments, something also appears that reminds me of band-aids and bread dough. Strange, but certainly not unpleasant.

Good body. Oily. The sweetness returns, but with citrus fruit in the lead. Acid candy and Haribo bears. Vanilla, again. Relatively simple. The lime returns, the band-aids do not. Now rather something of licorice and soft pepper. Accessible, but far from grand.

In the finish, that medicinal note returns for a while. Becomes relatively earthy, if you know what I mean.