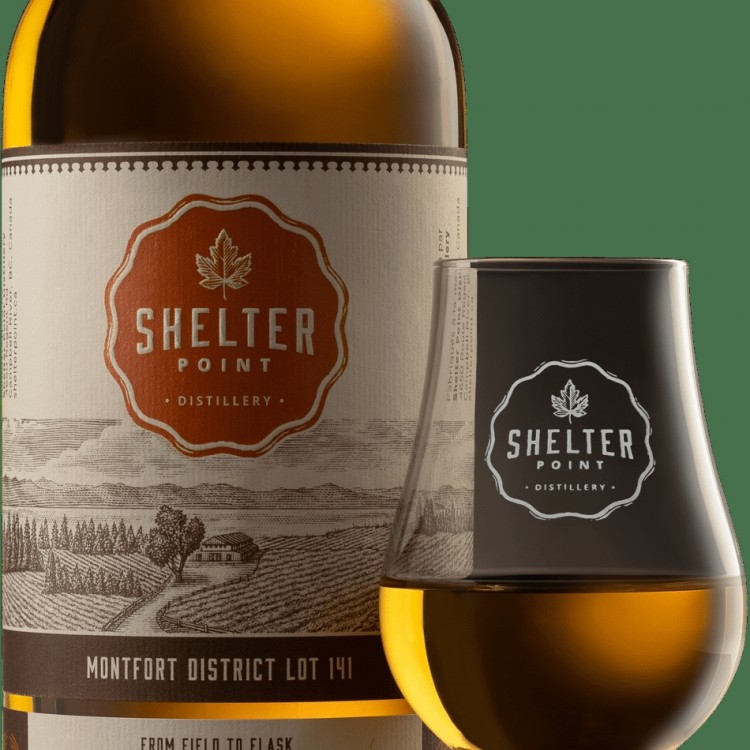 Shelter Point Farm & Distillery was established in 2011 on Vancouver Island in BC and is a true "field to flask" operation, using traditional Scottish distilling methods to make vodka, gin, liqueur and whisky. Montfort District Lot 141 refers to the field the barley was grown in (and even has the latitude and longitude on the label). This was triple distilled from 100% unmalted barley and bottled in August 2017. No batch number or age statement is given, but there are 1417 bottles of this particular batch. The bottle has been open for some months.

The colour is a pale straw. Unmistakable barley on the nose, wreathed in citrus, lavender, fennel and cotton candy. Toasted oak, overripe peaches and green apple skins. Very nutty, with vanilla and milk chocolate. Water just seems to dilute so go easy. This has much more in common with Scotch grain than Canadian whisky. Unexpected and unique.

On the palate more citrus comes out, with grapefruit, some candy floss, lots of vanilla and light toffee. Lavender honey. Very herbal. Creamy mouthfeel. Some clove. Where it just diluted the nose, water livens up the palate. Not as refreshing as the nose but still very nice - though quite youthful.

The long finish is spicy with toasted almonds and pencil wood. This is a great example of how varied Canadian whisky can be - I would bet in a blind tasting this would be mistaken for a Scotch grain. Definitely worth seeking out - and I expect future, longer-aged bottlings will be stellar. Winner of Best Canadian Grain Whisky at the 2019 World Whiskies Awards. Next up, let's try their single malt...

I've been curious about this whisky, I wonder if you found any parallels to a Irish pot still considering the unmalted barley?