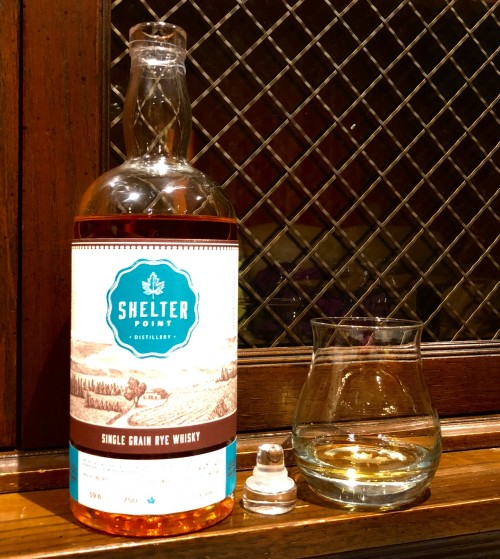 Today is Election Day in Canada. It seemed fitting that I should celebrate our democratic process with something Canadian. I wanted to review Forty Creek Heart of Gold but I noticed that was my last review, when I officially became a candidate.

My party leader’s campaign song is by a singer from Trinidad but I don’t think I have any Trinidadian rum. The song is quite catchy:

And I’m on call tonight starting at 10, so no drinking for me. Though depending on the results…

So yesterday I sat down with this gem. I first tasted it when @paddockjudge brought some in a flask to my daughter’s bat-Mitzvah in August. That was from a Chinese teacup. Delicious. That night, at the after party we had some more and I was made aware that it was on sale at KWM for 10% off. I made sure that it was purchased, and thanks to some great “mulage” by a nephew, the bottles all came to Toronto in time for @paddockjudge to retrieve his at his next visit.

I don’t know a lot about Shelter Point or this expression. The label says it was distilled May 2009 but I don’t see a date of bottling. Given that it was released this year there’s a good chance this is 9 year old rye. What I understand from @paddockjudge is that the spirit was produced by Alberta Distillers (the ones who make Alberta Premium and have provided rye spirit for several US producers including WhistlePig), was sold to Shelter Point, and then bottled for the Kensington Wine Market. This was a single cask bottling of cask 343. The label indicates it not chill-filtered and that there is no added colour.

I opened this bottle on September 29 (on the first night of Rosh Hashana) with family and friends and subsequently gassed it. I would say it was between 80-90% full when poured for tasting.

This expression, poured into (what else?) a Canadian Glencairn whisky glass, is reviewed in my usual manner, allowing it to settle after which I take my nosing and tasting notes, followed by the addition of a few drops of water, waiting, then nosing and tasting.

Warm baking spices, Granny Smith Apple in the background. Not too sweet. Sniffing it after leaving it covered the alcohol is a bit strong. I get butterscotch. Some vanilla (like sniffing a bottle of pure vanilla extract).

Powerful first sip but not overly spirity despite the almost 60% ABV. Rich flavour. Fruity and spicy. My tongue tingles through the development. Water brings out a peppery note and makes it drier, a little more bitter. (22/25)

Slightly astringent with a sweet and sour fruit finish. More bitter with water (21/25)

Nose and palate complement themselves well. Nicely rounded (but not “smooth”).

This is very different from the cask strength Lot 40 ryes, though I have not yet done a H2H. I find the flavours brighter, more higher pitched notes, to use @Victor’s term (not sure if I’m using it correctly). I usually like my high proof spirits with a drop or 2 of water, but not this time.

This is a solid whisky presented in a solid manner.

A couple of of interesting things about this bottling. The closure is glass with (I believe) a silicon ring for a seal. I’ve seen this on a bottle of wine I recently bought as well. I wonder if this is a direction for the future.

A note on transparency. In this election the two front-runner parties have shown a lack of it. Whether the incumbent PM muzzling his ministers and preventing inquiries into alleged conflicts of interest, or the leader of the opposition refusing to confirm or deny whether his party hired a consultant to sling mud at another party, it has at times been an ugly campaign.

This rye’s packaging states clearly that it is not filtered or coloured. It is an excellent whisky, and clearly does very well without any “touch up”. Other producers would be well advised to follow this example.

@Nozinan thank you for your review. That's good to hear that more high proof offerings from ADL are becoming available.

@Nozinan Speaking of the election: good to see Jody Wilson Raybould winning as an independent. I love that Justin will have to see her across the aisle every day.

I'm currently writing up their single malt and single grain whiskies - I guess it would be pointless to compare to this cask strength rye if it was distilled at Alberta Distillers rather than Shelter Point....