@TracerBullet There are long skinny fingers and short fat fingers.

@OdysseusUnbound I know. The last time I was in Sudbury I was 17. I spent that summer as a Junior Forest Ranger. An unforgettable experience.

@Victor and @NamBeist, belated Happy Birthday. A toast to your health with a dram of Cragganmore 12, 2019 special release. It has taken me awhile to figure this one out but, now I can appreciate the interesting interplay between the peat, smoke and white fruity, flavour profile.

Starting tonight with an Old Fashioned made in the traditional way with a sugar cube, orange bitters, a touch of water and 2 ounces of rye. Orange peel garnish. Using a Catoctin Creek Roundstone Rye tonight. 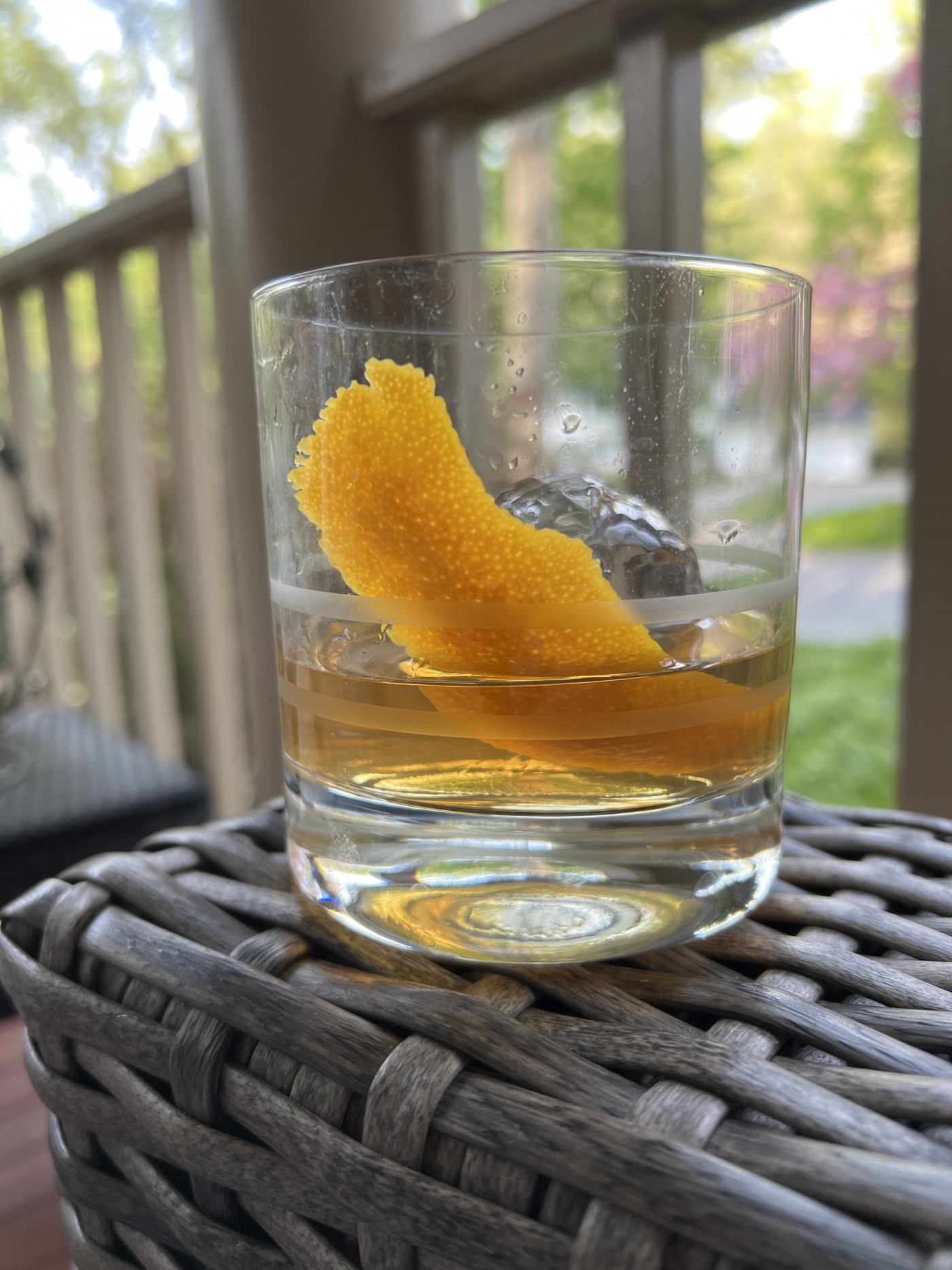 Opened this up tonight as haven’t had a dram all week and thought that might make my palate more receptive to the subtleties of this one.

The nose is lovely. Fresh fruits, peach, apricot, apples and a touch of banana. Sweet with vanilla custard and brioche or panettone. The taste wasn’t quite as fulfilling neat but with a touch of water it accentuated the fruit. I will have to play with water on this one as for me this might be key. Some bitterness which is interesting.

Was it worth £100? To me, yes I think so. I am sure there is better about but those bourbon casks they used were good uns, and compared with other drams in this field ( thinking of my Clynelish and Glencadam bottles ) it stands up.

Will see how the bottle goes down. 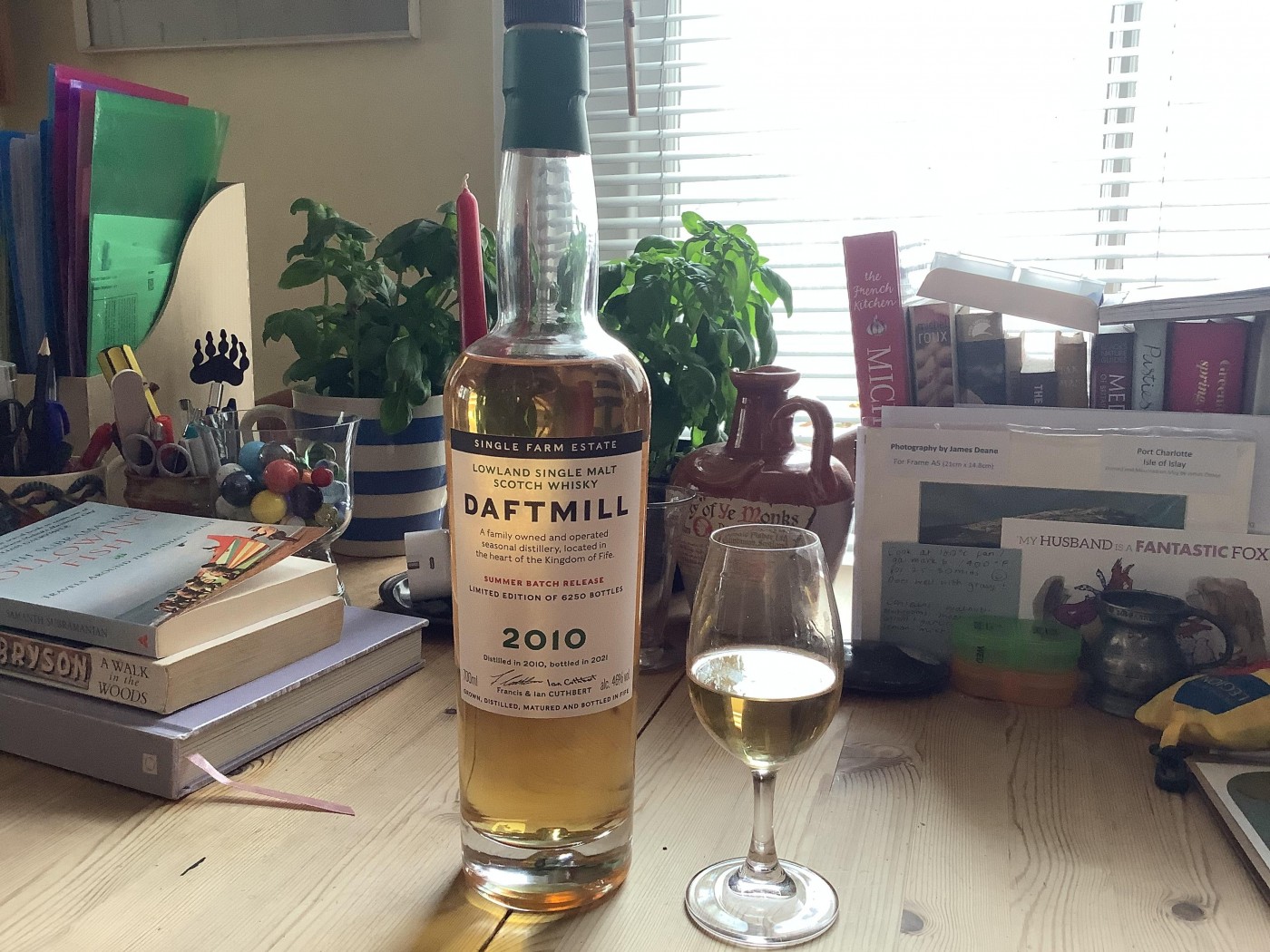 Very interesting to have them like that, seeing how the agave changes and softens. My partner liked them all but loved the anejo.

We then had some malts to compare. Springbank 10 and Talisker 18. She loved the former.

Finished with a Guyanan rum as the anejo was moving into rum territory the more it sat in the glass. Very similar notes to be fair.

Lovely evening and I was surprised how sweet the malts seemed after the tequilas. 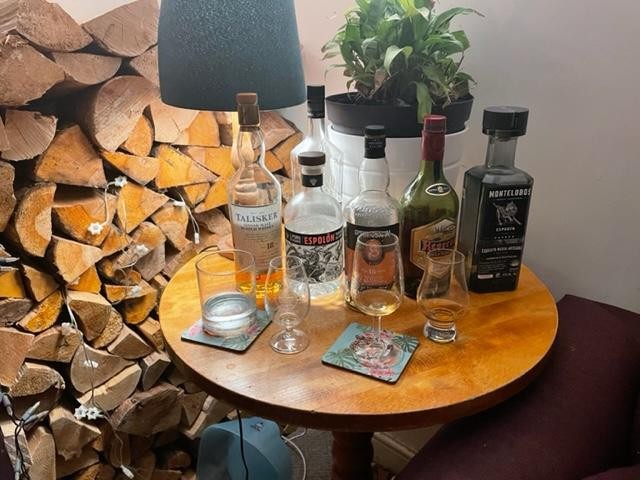 I had a dram of Amrut Peated Cask Strength last night. I bought a bottle of a new edition lately. It was a great dissapointment. It fell flat. There were hardly any fruity notes on the nose, palat and finish. It seems that the glory days of Amrut Peated Cask Strength are over. You'd better spend your money on other peated whisky's such as Port Charlotte, Kilchoman and the core range of Ardbeg.

@NamBeist - good to know! I've been hankering for another bottle of Corryvrekan, actually ...

@NamBeist Sorry to hear it was disappointing. I've only tasted from 2 batches and both were excellent. I was thinking that in order to reduce my burden of bottles I might use some of the ones I have left as gifts, but now you have instilled in me a bad case of FORO. Plus that stuff is hard to find in Canada now, even Alberta...

Sunday afternoon: Glenallachie 12 in the glass, Krautrock on the TT. The Glenallachie is a very pleasant surprise and the German electronica is nice background as I make my way through the weekend papers. I don’t know why I bother, it’s mostly depressing and anxiety inducing. I’m going to crack the bottle of Port Charlotte Islay Barley I bought recently and try to look on the bright side. 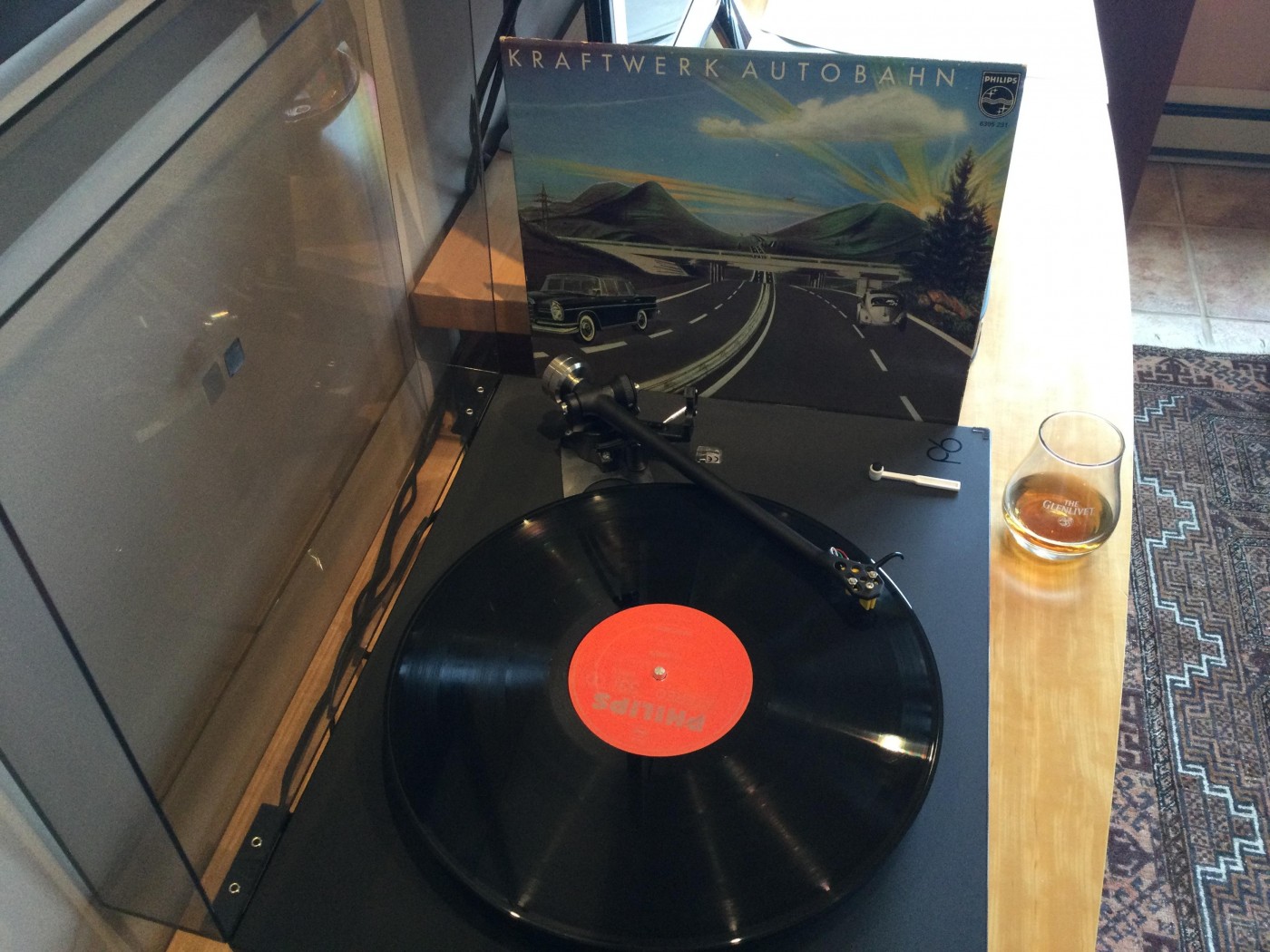 Take it from someone who always has a bad case of FORO. When you see it, and can afford it, buy it. Of course...my real problem now, is that I am not consuming as fast/much as I should in relation to my purchasing speed. Books and bottles, this is how it is for me.

But to keep my post still with the thread. It is now 19:14 on May 1. To celebrate Labour Day, and in solidarity with the workers of the world, I decided to pour myself a dram of the 17yo Taketsuru. 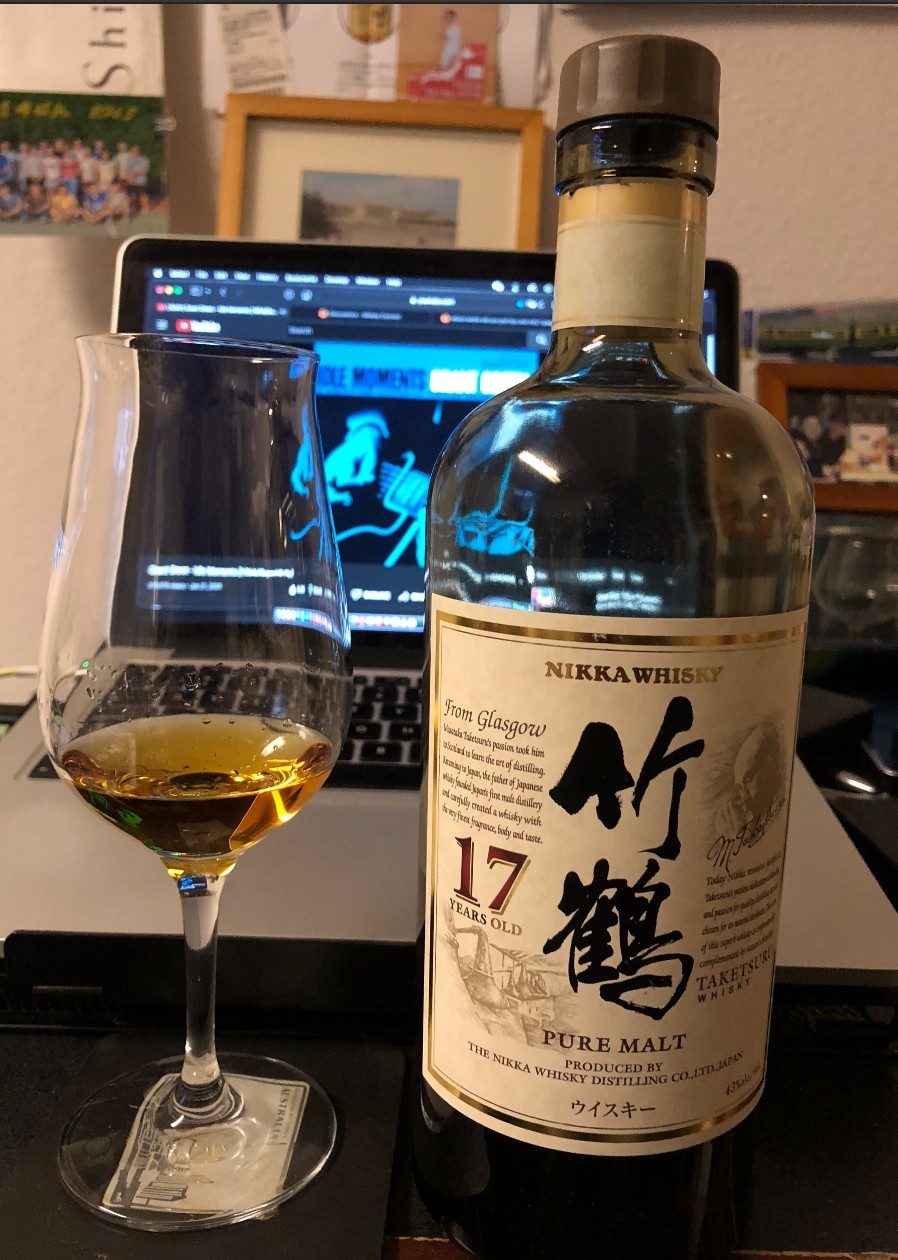 I consumed 75 cc of spirits (all whisky) in April. Bear in mind that there were 8 days of Passover where the cabinet was sealed off.

Tonight we had some friends over and he likes to make cocktails. He brought a kit that was apparently created by North of 7 distillery. It has everything you need for different cocktails including 2 wood chips for smoking glasses. There are QRS codes for the recipes.

This was all in context of a meal that included ceviche and guacamole appetizers, and jerk pork and jerk chicken as the main.

He made his wife a martini using N7 vodka. Then a smoked Manhattan which we split.

Then he made “dark night full moon” with gin, lemon juice and fulsome mixture that included elderflower extract and charcoal.

For the smoked Old fashioned I suggested we replace the 40% single barrel N7 whisky with Stagg Jr at 65.75%. It was very good. He left me the 50 cc bottle of N7 whisky which I will review at a later date.

After they left and my wife took leftovers to my brother’s home, the asked me to make some mojitos. I had made simple syrup in anticipation but it wasn’t used. I used Wray and Nephew Overproof rum and they were quite tasty.

In all I estimate I consumed as much spirit alcohol today as I did all last month.

Happy May Day everyone!

Work and Whisky life have been busy, so I'm a week behind in my posting.

On Saturday night. I prepped for a Society tasting that @jordytropp and I would be conducting 2 days later by tasting through the following;

On Sunday, I had the opportunity to be 1 of 9 judges for the upcoming Seattle World Whiskey Day event on May 14th. We blind tasted 38 whiskies in 6 flights (categories) starting with Bourbon, American, Single Malt, Peated, World and Best in show. Winners will be announced on the 14th, so I'm not supposed to reveal results or the whiskies that were part of the competition. This was the first time that I've been a judge and I had a blast.

After the event, went to the bar and had a Narwhal cocktail; Knob Creek Rye, novo fogo aged Cachaca, carpano antica reduction and Olympic bitters. .

On Monday night, @jordytropp and I hosted the Society tasting where we led attendees through a blind tasting of the 6 whiskies that I sampled on Saturday night.

After the event, the owner of the restaurant where we conduct the tasting shared a few drams with us;

On Wednesday night, had a dram of Kilchoman Machir Bay - 46% ABV.

On Thursday night, had a dram of "Undisclosed Islay" from Single Cask Nation. Bottled in conjunction with the Water of Life Film. 6 Islay casks (5 unpeated + 1 peated) 48.8% ABV.

Tonight (Friday), my whisky drinking Mother-in-Law is in town for a few days. My wife, her mother and I played cards and drank whisky after dinner. We all had different drams, but my wife did kill off our Glen Elgin 14 year and our 29 year (1980) Dallas Dhu from Signatory Vintage collection.

I had the following;

Enjoying the last of The Obscenity, a blend of Laphroaig Lore, Glenlivet Archive 21 YO, and Macallan Cask Strength, in the ratio 1:4:8. A final pour from the 2020 batch which was prepared to mark the marriage of our son and daughter-in-law. This would be my Desert Island Dram. Had a couple last night.

Finished off my bottle of Glenfarclas 104, followed by a Benromach 15 and then a G&M Caol Ila 13. Really enjoying this bottle, might have to get another. Cheers.

Yesterday (Sunday), celebrated Mother's Day at my Brother-in-law's house. After dinner, we had the following drams;

After a full day of seeing patients, and an evening of door to door canvassing, I'm tired.

I had a large glass of soda water, and settled to finishing my charting and listening to the Jays game. I have had no time for whisky since the cocktails I had on May 1. So tonight I poured a small measure of Aberlour A'Bunadh batch 53. It's the second time I've tried it, the first time being my birthday in April. It's a little hot but I think with air and now a little water it should settle. Great nose.

Last night, I rated 4 of my unrated, open bottles;

While playing on-line poker with the guys tonight, I rated 4 more of my open bottles;

Celebrating World Cocktail Day with a new to me cocktail.

Stir, strain, and serve up. Garnish with a cocktail cherry. 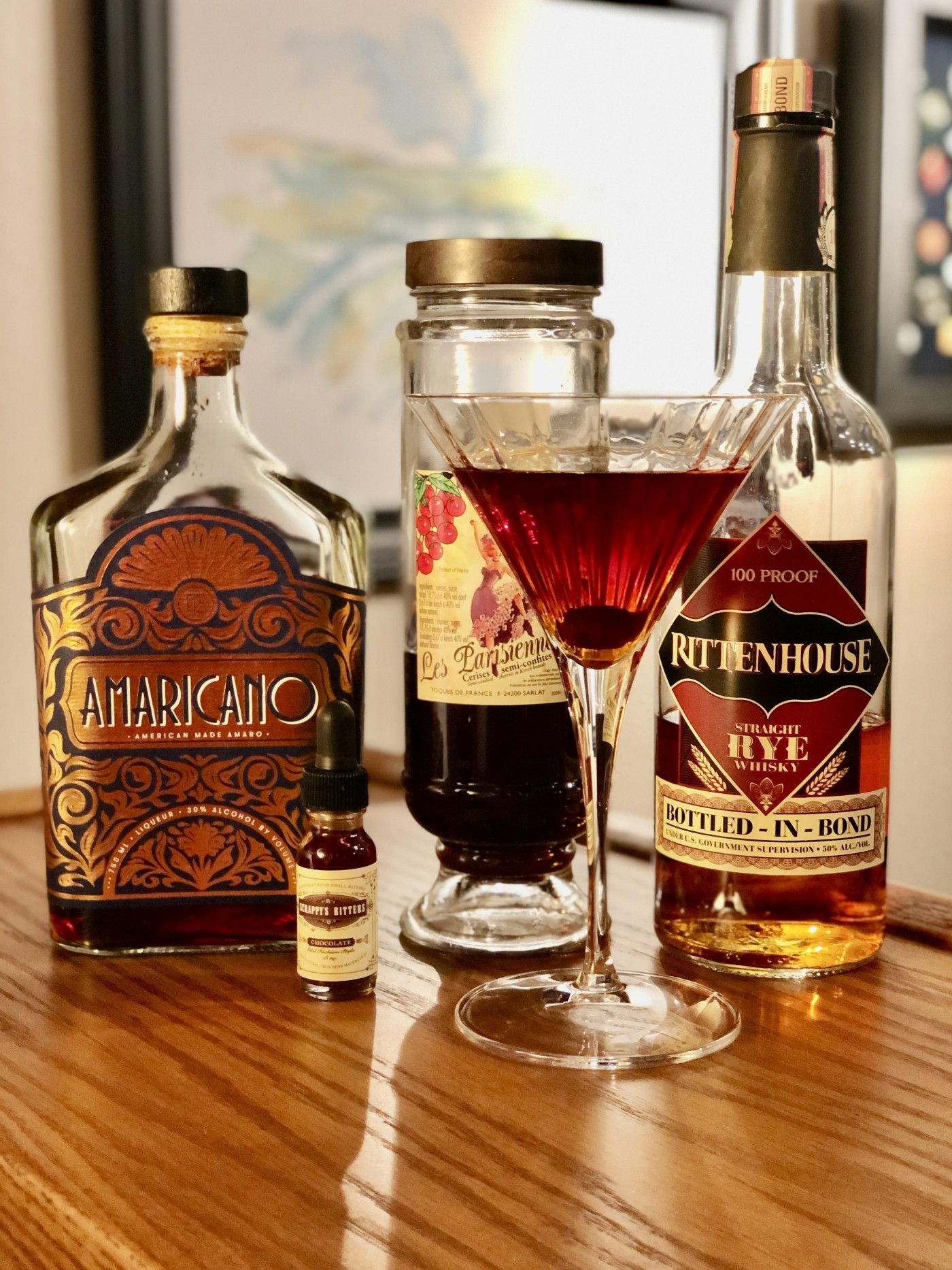 A blend of Eyes from ADL(Canadian), MGP,(Indiana) and Kentucky. Finished in Apricot Brandy cask, Maderia, and Martinique Rum cask. There is Clynelish in this blend and a teaspoon something else(Tomatin?)

Barrels are 3rd or 4th fill. It does not taste over oaked.