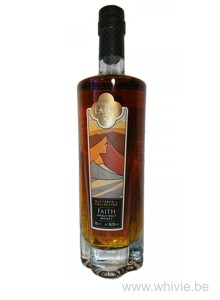 The Lakes Distillery in Cumbria, England, was only founded in 2015. To create cashflow they initially released a blend called The One. But by now their single malt is ready to be released. Dhavall Gandhi, their whisky maker, created the Quatrefoil Collection consisting of young malts that were finished on PX casks after their initial bourbon cask maturation. The series got kicked off in 2018 with Faith, followed in 2019 with Hope. This year will see the release of Luck and in 2021 the series will be concluded with Love. Quartrefoil, by the way, is a decorative figures that consists of four overlapping circles as can be seen in the logo on this bottle.

Soft nose with clear influences of sherry, which translates into apricot pastry, marmalade of mirabelles and dried apricots. A pinch of cinnamon and some vanilla. Surprisingly soft for such an ABV. The nose is very good in my book, especially considering the young age.

The arrival is sweet with some sour notes. Grapefruit precedes apricots and mirabelles. Now the ABV does make itself felt and the malt dances on the palate, without making you gasp for breath or reach for water. Nice balance between the spiciness of the wood and the sweetness of the malt. A soft, sweet, very sherried whisky that makes me happy.

The finish is surprisingly long, very sweet and a little sour. Mildly drying.

This whisky is good – very good, in fact – but too young to command a price of almost 300 EUR.