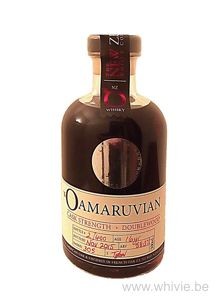 Let’s remain on New Zealand just a bit longer and try a whisky that was distilled by Willowbank. That distillery is no more – it closed in 1997 and the still were sold to a rum producer on Fiji – but the remaining stocks are still released by the New Zealand Whisky Company. Today one that was released quite a while ago: the Oamaruvian 16 Year Old, finshed on red wine cask from New Zealand (doh!).

Rum & cola! WTF!?! Apologies for my language, but I did a double take as soon as I put my nose in the glass. This really smells of rum and cola. Admittedly on steroids, but still. Once I get past that flabbergasting moment, I can concentrate on some of the nuances. I get raisin bread, plum cakes, cardamom, aniseed and raisins. And cola-bottles, the candy. Digging even deeper I also discover wood glue, mocha and cough pastilles. Intriguing malt on the nose!

The arrival is powerful and immediately very drying. The oak screams! The sweetness of the malt is joined by some sour notes from the wine which results in an interesting mix of blood oranges, cinnamon, cloves, aniseed, gooseberries, cherries and… err… rum with… err… cola. I’m not joking. I am serious. And it is not only fun, it is also very good (in its genre).

The finish is dry, drier, driest. And candy-like sweet. Again that sensation as if I have cola candy in my mouth. What fun.

Pour this blind and I’m sure the first response will not be whisky, but rum or sherry. It’s that dark and sweet. What a feast! A New Zealand malt, distilled on Scottish stills that are sold to a rum producer and finished on red wine casks, smelling and tasting like Coca-Cola. Even Hollywood could not dream up something like this.

I've not had this one but it sounds like it's got a multiple personality complex. I think the old stock from the distillery is quite variable depending on what it's been maturing in. Another great review @markjedi1