I've started to realise that of the well over a hundred bottles that I have stashed about the place, there are several that, in all likelihood, I will never drink.

I've been debating boxing a dozen or so up and sending to auction. Primarily, to make space, but also, any profits can, with a clear conscience, be returned straight into the whisky piggy bank.

Now, I don't mean anything rare, old or well-liked - I'll be hanging onto those, thanks! - more the accessible, cheap malts, a few blends and such.

I guess there's a chance that in keeping them I may benefit further down the line but I can't imagine a bottle of Jameson's or Ardmore Legacy, for instance, would significantly appreciate in value ;). That said, in twenty or so years who knows how they'll taste after some bottle ageing?

Merits to both, and I really doubt any would sell for more than rrp but the cash and space would be welcome. Thoughts?

I read you bold and clear.

I came to the conclusion some time ago that my collection was not one that I would get through in three lifetimes. I've made my peace with it to some extent. My daughter seems to like some of my whiskies and I hope that the bottles I leave behind will be appreciated by future generations.

That said, I continue to be plagued by FOMO, and a little bit of FORO. I'm hoping to hold myself to a net increase of bottles in the single digits this year (so far I am even).

That said, I will look for opportunities to divest myself of bottles that I no longer want - there are a few expressions where I am overextended beyond my comfort - and where I have some multiples and I can either let them go at cost to someone who has fewer, or give them as gifts.

Part of the challenge is wanting to be able to provide novel whiskies to friends (especially in a tasting group), and that means constantly acquiring new expressions. And opening more bottles.

Maybe I should allow myself to offer good quality whiskies that have been tasted before . Maybe there is a happy medium...

But I acknowledge that growth of my collection is no longer sustainable.

I too have given thought to moving excess bottles out of my bunker and converting into cash. State laws prevent me from doing so by the most straight forward means. Auction does represent one means available. Considering other possible means such as bartering. Private placement no doubt falls within prohibition by state law but not completely opposed to discreet and infrequent transactions. Perhaps if done outside of state boundaries. No doubt many legal ramifications. For now, willing to sit tight.

Unfortunately, liquidation/reduction of collection was never considered within my original estate plan. Now recognizing that failure and want to put a plan in action. Not wanting to saddle significant other with that burden or task.

@Nozinan If you have any (more) bottles of Booker's you want to be rid of, I'd be glad to help.

@RianC I decided that my collection was getting beyond hoarder levels so I decided to drink only what I have for the rest of the year. Well, I'll try, but like many others, FOMO and FORO are strong. I thought I'd save money by purchasing less whiski but I've just diverted that spending into the acquisition of guitar gear. I have all the impulse control of a teenage boy.

I keep telling myself I am buying for my retirement when my income will not allow as many whisky purchases which causes FORO to kick in. That said, I have more than I can finish now and I still have about 7 years before I can retire so I have changed my purchasing habits a bit (or I am trying to).

I am avoiding many of the "special releases" due to the cost (they have gotten ridiculous) and the unknown quality of the release. Too many times I have, in my opinion, paid too much for what ended up being an okay bottle. There are still a few I will try to get like the Kilchoman Club yearly releases but that is limited to 1 per person. Most of what I am getting now is a sub-$100 everyday drinker that I know I enjoy.

That is precisely the regimen I implement in both my garden and cabinet, daily...and I enjoy sharing the fruits of my labour.

Another reason to thin the herd is if your taste changes/evolves over time. It makes room for more desirable bottles.

@OdysseusUnbound I appreciate the offer. Currently I have a slight abundance of Bookers. I expect my open bottle (a blend of four of the 2016 releases that is better than each individually) will last me a few years yet, so I may take you up on that.

I reckon get rid and use the space and cash for more interesting whiskies!

Having said that I always like having a few bottles of that type of whisky on the go for long drinks or unbothered guests.

Whether they will be better after a few years is an interesting question and depends I presume on the continued decline in quality of the said brand, so in comparison in 20 years they shine?

Or has that decline plateaued out? Maybe it will improve?

If I could afford multiple buys of each whisky I reckon I would have the same problem but the same FOMO that others have mentioned, is difficult to resist.

Oh and as I think I may have mentioned, I open everything pretty much straight away as I am so interested to find out what they taste like.

So much interesting whisky out there! And limited funds for me it has to be said.

Let us know what you decide.

Thanks for all the replies. I'm still undecided but am definitely leaning towards 'pruning the plants and digging up the weeds!' I think this makes the most sense and I could put the profits towards a bottle (or two?) of old Revival from auction, or something equally nice!

Having a few blends for guests etc is useful but I can always get one and they're often on offer so won't break the bank. It might also encourage me to start actually making more of a dent in my stash by actually drinking some of what's left

Heresy? Prudence? Both? Neither?

I’m undecided as to which it is, yet decisive when giving the young lad’s cabinet a boost. From my shelves to his, some great bottlings and some not-so-great bottlings.

I suppose time will tell.

Making room and paying it forward at the same time.

…. and a few dust collectors…. 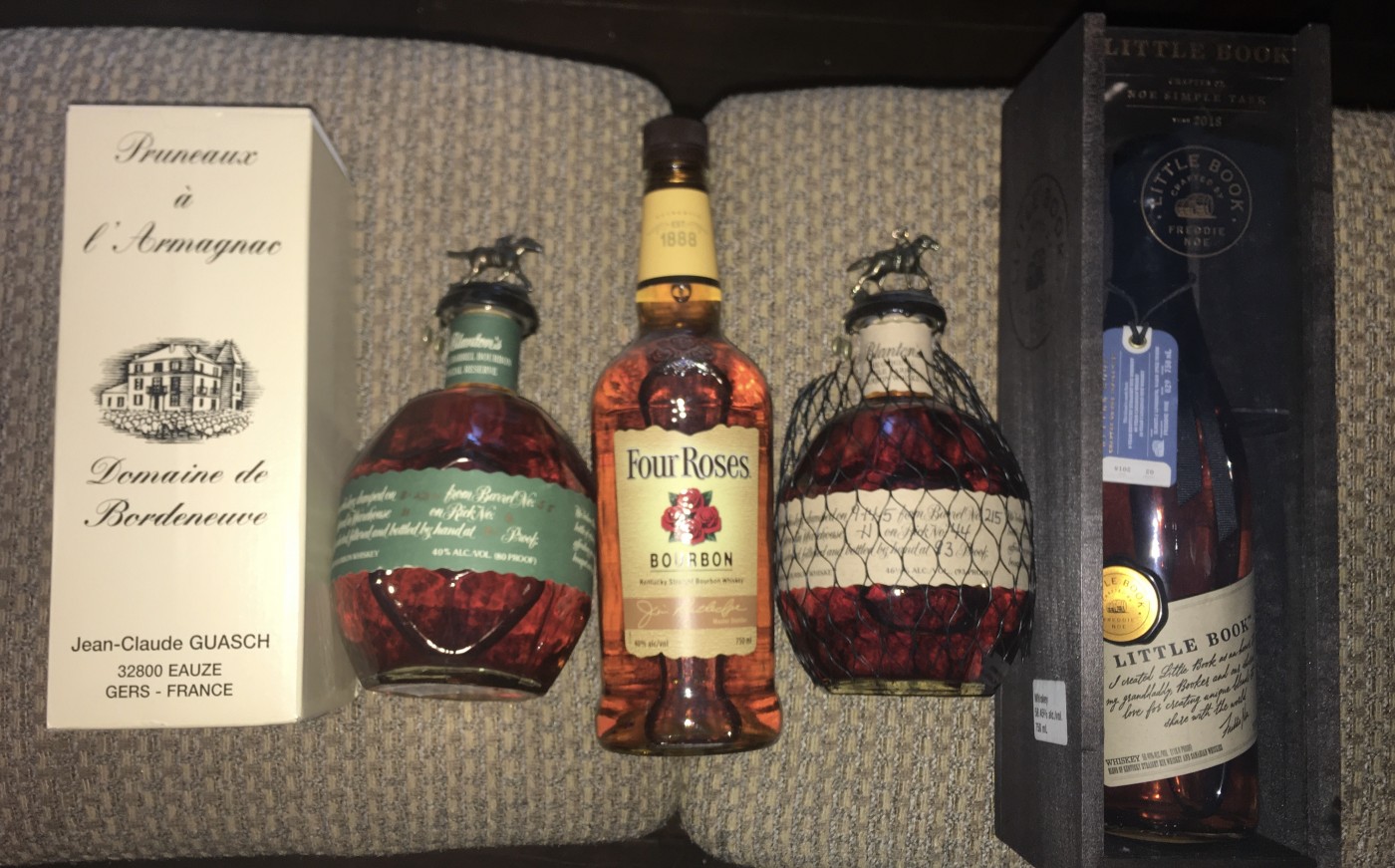 @paddockjudge is that a Little Book in the ‘dust collectors’?

I'm a big fan of this release, I secured a handful. Now sharing the bounty. Have you tried this version?

@paddockjudge . Not yet, my bottle is in another city with my brother.

It's a beauty! POWERFUL, complex and loaded with fruit.