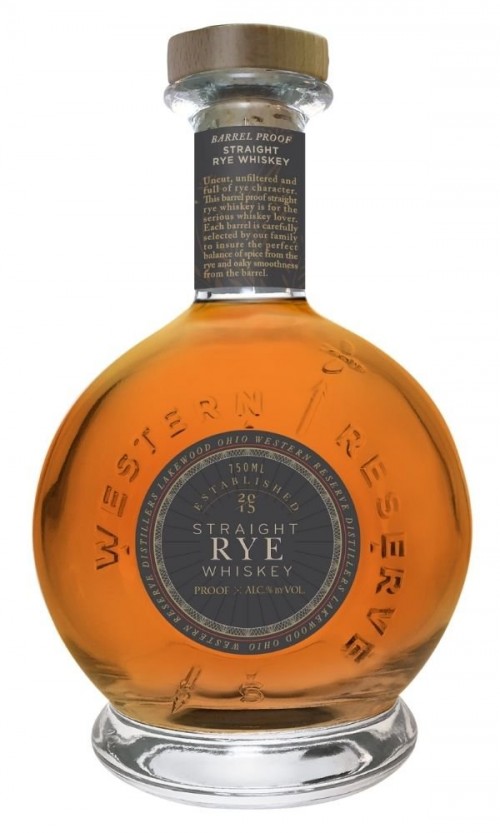 Every once in a while, the owner of the best local shop in town will post in our local whiskey group about something he gets in that he thinks is especially good. The other week he posted this 8 year old MGP rye store pick that he said was the best MGP rye he's ever had. Maybe he was just trying to get some sales, but it worked, and several of us "enthusiasts" went and grabbed one.

As mentioned, this is an 8YO MGP straight rye whiskey, and it uses the higher rye content mash bill (95% rye, 5% malted barley). Barrel proof and un-chill filtered. Neat in a Glencairn.

Nose: This checks several boxes. Fruity, spicy, oaky, and with a kick of chocolate. A small hint of dill at the end. It doesn't hide it's proof either. I can quite literally smell some rye bread that's been sprinkled with cracked black pepper. It's quite an interesting balancing act between the sweeter notes (fruit, chocolate), and the more savory notes (rye bread, pepper, dill, cigar box). This has a lot going on and thanks to the barrel proof, the flavors are all nice and strong.

Palate: Wow, spicy chocolate! Like, dark chocolate infused with chili peppers. Second sip lends out the rye bread with cracked black pepper and the dill. Cigar box/oak in there as well. Not quite as fruity as the nose, as the sweet notes are dominated by the chocolate. Full-on spicy chocolate bomb.

Finish: The chocolate fades, and the fruits come back for the finish and it lingers. Blackberry/raspberry/red apple with just a hint of that spice. Nice transition.

Overall: This is a full-bodied, well-aged rye that explodes with flavor. At $59 it's a steal. If Buffalo Trace made this, there would be lines out the door.

@casualtorture thank you for your review.

MGPI has always known what they were doing. 8 yo rye at 58.66% ABV from them should be great. I am not surprised. That is especially nice that they are using the 95% rye mashbill. The more rye the better.

@Victor this is likely the oldest rye from them I've had, and the only barrel proof. The only rye I've had better than this is lot 40 CS, and that's in a league of it's own.

@casualtorture a lot of the best ryes are impossible to get your hands on now, except in the thousands of dollars. 20+ yo Willett Family Estate Ryes, Rittenhouse 21, 23, and 25 yo Ryes, Sazerac 18, Thomas H Handy, Van Winkle Family Reserve 13 yo Rye, etc. The rarest bottle I own is probably my one bottle of Rittenhouse 21 yo Rye. My favourite bottle of ALL types of whiski I have EVER owned is a private single barrel 10 yo Abraham Bowman Rye at 69.4% ABV. All of these vanished from the scene at affordable prices about 10 years ago.

Among the Canadians I am with you that 2018 Lot 40 CS is a masterpiece, but I don't consider the 2017 release to be anywhere in the same league. Haven't tasted the 2019 release, but by all reports it is "different", and not in a consensus enthusiastic way. The 2010 (and probably 2011) releases of Wiser's Legacy were also great works of art. Later releases were solidly good, but not ecstasy-inducing as were those.

Are you drinking any Old Potrero? 100% malted rye is a thing of beauty, especially from them. It's as different in flavour and mouthfeel from unmalted rye whiskey as malted barley whisky is from Irish pot still whiskey.

About MGPI, one of my favourite memories is of having met Greg Metze at Tales of the Cocktail in 2019. He had worked for Seagram's-LDI-MGPI for about 38 years and was their master distiller for about 15 of them. He probably invented that 95-5 rye-barley mashbill. The Wheat Whiskey from his recent startup company Old Elk is 95-5 Wheat-Barley. As the day ended and I was chatting with him at the Old Elk table he said to me, "They won't let us give away any liquor, but I wouldn't mind if you walked off with a bottle." It's a great wheat whiskey.

@Victor I’ve enjoyed every Lot 40 CS release but the 11 Year Old is head and shoulders above all the others imho.

@OdysseusUnbound oh yes, I've long been on record as having said that the 11 yo 2018 release Lot 40 Cask Strengh is EXACTLY what I want rye grain Canadian whisky to taste like. It is in a class with the great rye whiskis, which, as mentioned above, have become quite rare and quite expensive. And thank you again, @paddockjudge, for having sourced for me bottles of both the 2017 and 2018 release Lot 40 CSs. And thank you @Nozinan, for having given me a bottle of Wiser's Dissertation, another true Canadian beauty, albeit not in the high ABV category.

Can never get enough Rye reviews or Rye itself. I own 60 plus different Rye's and over 70 bottles of Rye but the aged MGP Rye is so hard to come by for me. Of the few I have, they are 4 years old at best. Still excellent as youngish Rye still works for me in many cases.

@Victor I didn't know the Old Elk founder came from MGP. People around here really seem to enjoy it. I haven't tried it yet.

@OdysseusUnbound You liked the 2019 Lot 40 CS? I have to say my taste of it was not positive.

Personally, I like both the 2017 and 2018 releases a lot, and my favourite is usually the one I have in my glass at the time. They are a little different, but both sensational.