The UK government plans to get tough on binge drinking - how? - by effectively doubling the price of some spirits, according to the Telegraph. 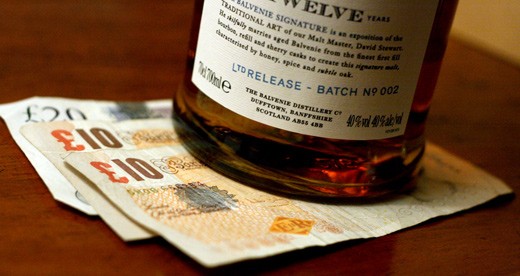 A bottle of blended whisky such as Bells could increase in price from around £14.79 to £23.73 according to the article. Assuming the duty is not a percentage increase but a standard amount per bottle, here at Connosr we calculate that to be an £8.94 increase.

Effectively this would mean that your £20-25 single malts will increase by about a third and even more expensive whiskies will still see a significant percentage jump in price.

Whilst we don't condone binge drinking, and would in principle support official efforts to reduce alchohol abuse, we think this is lunacy. People who buy bottles of quality single malts are, on the whole, not binge drinkers. Most of us like to sip a glass or two, savouring the drink.

Now it should be pointed out , especially to non-UK readers, that the Telegraph is traditionally a supporter of the Conservative opposition party. So this could be a little bit of pre-election mischief making. But if its true this can't be good for the whisky industry, or sensible malt enthusiasts.