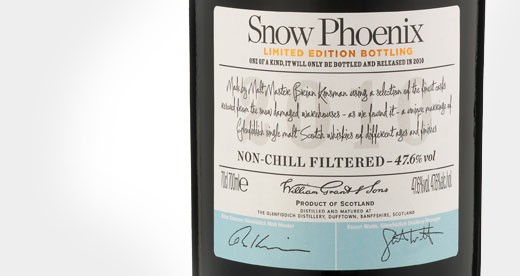 On the evening of 7th January, in the most remote part of the distillery estate, a number of warehouse roofs dramatically collapsed under the weight, leaving the maturing oak casks exposed to the night sky. In wintery conditions and temperatures of -19ºC, distillery staff swung into action, working round the clock to clear the snow.

Glenfiddich Malt Master, Brian Kinsman, commented: “Standing amongst the wreckage and exposed casks, we were working out our next steps and assessing the situation. I was thinking about how the casks, some of which were very old, contained some beautiful whisky and it occurred to me that they would create a fantastic non-aged single malt. A limited edition bottling from the whiskies in the damaged warehouses would be an appropriate way of celebrating the pioneering spirit of the distillery team at this moment in Glenfiddich’s history.“

“A photographer was shooting the scene and rather fittingly, when we looked at the pictures, the light shining through the warehouse roofs looked like a phoenix rising above us. I suppose this was the moment of conception of Glenfiddich Snow Phoenix.”

Snow Phoenix was created by marrying together natural strength and non-chill filtered casks of different ages and finishes, including American oak and Oloroso sherry.

You can view some video reviews of Snow Phoenix from the WhiskyPod here: review 1 and review 2