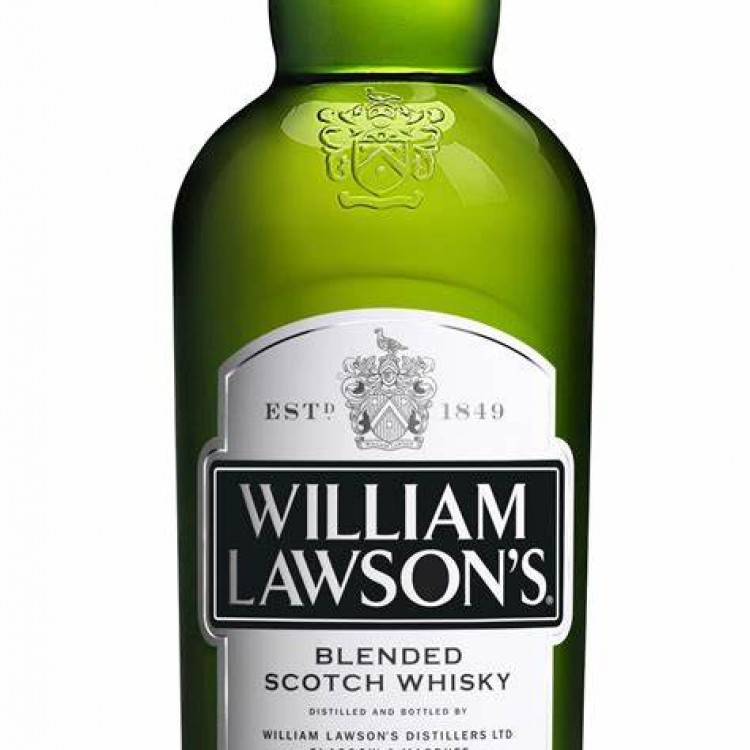 I have some time off of work so perhaps now I'll get a chance to catch up on reviews! I have a lot of scotches I should get through so let's focus on that for the time being...

I picked up this bottle at the last LCBO / Waddington's auction - I was the only bidder so I think I got a pretty good deal, especially since this brand is very hard to find in Canada. William Lawson's dates back to 1849, and primarily features malt from Macduff (known as Glen Deveron); according to the label, the other malts in the blend are Highland. Owned by John Dewar & Sons, it sells over 1M cases a year, but primarily in France, Spain, Belgium and parts of South America (and Mexico it seems, as that is the original provenance of this particular bottle). I believe this bottling is older as the label design is not the current one (but not that old, I don't think).

The colour is a pale gold. Fruity on the nose with lemon meringue, heather honey, toasty oak and a hint of cinnamon. Vanilla. A touch herbal. Orange pith. Green apple skins. A bit peppery with water. Soft and unassuming.

Light and bright on the palate with more lemon, a bit of parsley, the faintest hint of spice and a creamy mouthfeel. Green apple. Hard candy (but not quite as sweet as that implies). Lemon pepper. Water brings out the malt and overall gives it a tart quality. Very pleasant but alas, a bit forgettable.

The medium-length finish is dry with some oak and white pepper. With time some spice builds up, but overall this is meant to be a light, summery dram - pleasant to drink and not too challenging. Apparently Glen Deveron tends to be sherried; though I do not pick up distinct sherry notes, it does have a dryness that could be due to some tannins. Certainly drinkable and pleasant enough but nothing to recommend it beyond a casual sipper.

@talexander thank you for your review. This one is NAS apparently.

One week ago at my sister's house I sampled a 13 yo William Lawson's blended Scotch which was one of the best Scottish blended whiskies I have ever encountered. I'd rate it at about 90 points. I looked it up online and that particular one is apparently not a regular issue product and is very hard to find at this point. There is none listed in North American on wine-searcher.com:

Sorry, I only just saw this as for some reason I'm not getting notifications on likes or comments. The website shows two expressions: the standard NAS (with a different label than my bottle) and "Vanilla Spiced Spirit Drink (Based on Whisky)". I think there is also a "Super Spiced" though it's not mentioned on the website. So yes, 13yo would be a one-off, they also used to have a 12yo called "Scottish Gold". Glad you enjoyed that one!