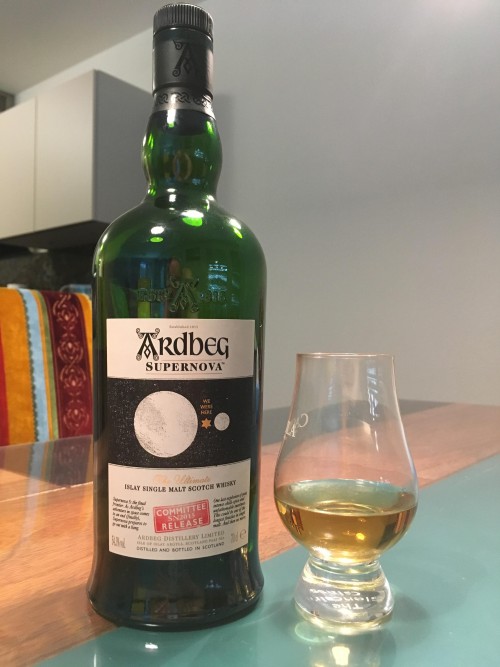 With a new Supernova release in the offing, I finally decided to open my bottle of the Supernova 2015 committee release that I had bought at the distillery in October 2015. It was launched to celebrate the conclusion of Ardbeg’s experiment of sending some maturing spirit into space, on board the International Space Station. In a 2015 interview with whiskycast, Dr. Bill Lumsden was asked about the taste differences of the spirit after it had been returned to earth. “The control sample, somewhat unsurprisingly, reminded us of Ardbeg”, he replied... Anyway, this is a blend of 9% ex-Sherry casks and 91% ex-Bourbon casks, peated at 100ppm.

The nose is quite sooty and “fat”, coming with lots of linseed oil. As was to expected there is plenty of peat, followed by vanilla and smoked ham. Some salt and brine, too, and a bit of sawdust.

The palate is medium-bodied and spicy, as well as smoky and peaty. Next, lemon flavours take centre stage, providing a rather sweet contrast to the peat and smoke. Later on, there are notes of vanilla and coffee.

The finish is long, warming and dry. The lemon flavours are back, together with smoked ham and some chocolate notes.

In my view this is a solid, complex and hugely enjoyable Ardbeg. The only other Supernova release I had the opportunity to try was the 2010 edition and upon rereading my notes (from 2012) it appears that I enjoyed that one about the same. Supernova is my kind of whisky: it is bold, peaty and sweet at the same time - quite simply terrific stuff!

END_OF_DOCUMENT_TOKEN_TO_BE_REPLACED

Sounds delightful, great review. I wonder what the new one will be like and how widely it will be available.

I do agree, @cricklewood. An Ardbeg Supernova is always worth hunting for, in my humble opinion.

A new Supernova? Great. I am glad that they went back on their word that 2015 was the last one. Can't have too many Supernovae. Supernova is the pick of the litter.

@Pierre_W thanks for the information that the SN2015 contained 9% sherry casks. I hadn't heard that before. I knew that the SN2014 had sherry cask involvement . . . I wish I could find out the percentage.

@cricklewood and @Victor many people have made note of the new Supernova SN2019 label at the TTB. What I don't think most people on the internet realized is that it was published by on . . . April 1st. Could it be a coincidence? Or was Ardbeg just pulling our leg? Being a huge Supernova fan (I currently have all four batches open . . . and also one each in reserve) I certainly hope that this release continues.

My own theory is that Ardbeg can no longer get malt that heavily peated. Port Ellen malting certainly isn't doing it. Bruichladdich has to have their malt for Octomore peated in Inverness (about a 7 hour drive and a fairy one way). My guess is that Ardbeg no longer considers the extra expense worth it. Anyone know anything differently? Anyone know where Ardbeg gets its peated malt? Most people assume Port Ellen. I wonder . . .

@Nock There hasn't been much info about the release of the new Supernova, hopefully it's not an April Fool's although once I see the price it will wish that it was.

Ardbeg gets it's peated malt from Port Ellen, I believe all of the Island distilleries do except for Bruichladdich and then there's the portion that is floor malted by Kilchoman, Bowmore & Laphroaig, things might have changed but that's what is usually advertised.

You might very well be right, either they can't get the super heavily peated malt or don't want to pay the premium to do custom runs of it. It would likely take a more than the standard 24-30hrs to dry in order to keep the barley in the "zone" where it absorbs and might produce smaller batches.

They would likely have to change the cut points when distilling as well. Of interest I attended the Zuidam masterclass at Spirit of Toronto in 2018. Patrick the distiller had us try two different peated new makes and asked folks to makes guesses as to which one was from a higher PPM barley as clearly one was "peatier" than the other. The reveal was that they we're both from the same spirit run of 50PPM malt, just taken at different cut points.That was eye opening.

Dear friends, thank you so much for all your comments to this review. @Nock, I do hope that this is not an April fool's joke as this would be an expensive joke, wouldn't it? I still hope that we will all get an e-mail from Ardbeg later this year, announcing the impending release of SN2019. I am having a dram of the SN2015 right now - this really is delicious!

For all of you who didn't get the e-mail . . . Ardbeg Supernova SN2019 is real and apparently currently available. No evidence of it in my area. Price is now close to $200 a bottle. I will certainly need to complete my collection. I am wondering at the age of this. I feel quite certain that Ardbeg hasn't tried this experiment again (of heavily peating over 100ppm). So that would mean that most (if not all?) of this juice will be from the original run. So this might actually be 15yo or older. I can't see the original 2009 release being younger than 5 years.