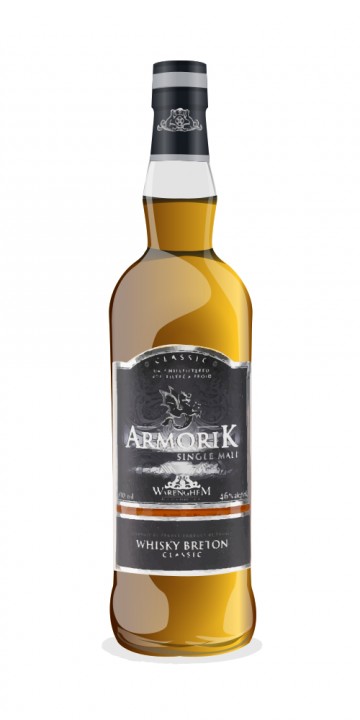 I bought this bottle a few years ago. Being a French Canadian, I was curious about a whisky distilled in Bretagne, France. I had read some reviews about it who let me believe it was at best ok. So it is a pleasant surprise to find a good whisky when you are not expecting one.

This whisky was aged first in oak cask from Bretagne and then finished in sherry cask. I read it was a 7 year old with the two last year in sherry cask, but the Official site of the distillery is not that eloquent.

So there it goes. First a whiff of alcohol, then dry oak and faint dry grass followed by hazelnut and a hint of milk chocolate. It's not nutella, it's really about the hazelnut. In the background you have some cardamon At the end the nose gives you pepper and sea breeze. With air the nose is less complex and the sherry notes reveal themselves from the beginning and mask the hazelnut and the oak.

On the palate, you have salty caramel with a good malt base and more cardamon than on the nose but still in the background. When the pepper and the salt are growing, some smoke and herbal notes are coming forward and a Name pop in my head: The Laddie Classic. It is quite different but the herbal notes, the salt and the smoke have some similitudes. There is not much fruit except from bake apples and the body is thick without being oily.

The finish is the weak point of this whisky. The pepper, the salt and the malt are of good lenght but the other flavors fade away too fast leaving you with a rather simple finish. When I try to concentrate, I detect the cardamon, but I think it's my head playing with the memories of it.

In conclusion, this is a very good whisky especially for those who are not looking for a fruity dram. The nose is the best part particularly on a fresh poor. The palate is not as complex but offers strong flavors with good thickness. The finish is the only part that prevails me from giving a mark in the 90. At the end... It is way better than anticipated!

I was not totally happy with my comparaison to the Laddie; I knew there was another whisky that it was closer to and I think I found it. So this Armorik is a bit like a light version of Amrut Fusion. The cereal and the white pepper are really alike although the French Armorik is not as intense as the Indian with less heavy malt but in counterpart with a beautifull French oak.

I also want to add that after three weeks this bottle has less cardamon but has now a nice orange taste really well integrated with the wood in a way that makes me think of Grand Marnier.

Now after about six weeks the fruit is full. I've got rich peach in syrup and some baked oranges and the final is better. I also forget to say that this dram has a rich body that really fill your mouth. So if you liked more integrated flavours, this one is for you and you will probably be close to 90.

I really like those Celtic blue Sea Dragons and wolverine-like critters on the Armorik box. The reviewed bottle is 'double' matured in bourbon barrels and sherry casks, though it is not stated whether that maturation was sequential or simultaneous. Armorik is malt distilled at the Warenghem distillery in Brittany, France. The whisky was not chill filtered. There is no age statement. The reviewed bottle was opened 3 days ago

Nose: rich with wine flavours, but also plenty of apple and pear from the barley. This is fuzzy-sweet, i.e. not too pointed or well-defined,...but pleasant. Murray didn't like this---he doesn't like fuzzy. The fuzzy here doesn't "bither me a bot" though. I like it

Taste: good translation of the nose flavours; this works for me

Finish: gradual fade out of all of the flavours together; fairly long; becomes a little more tart

Balance: good coherence throughout the tasting experience; for a nice winey malt whisky this will work just fine