Average score from 4 reviews and 9 ratings 82 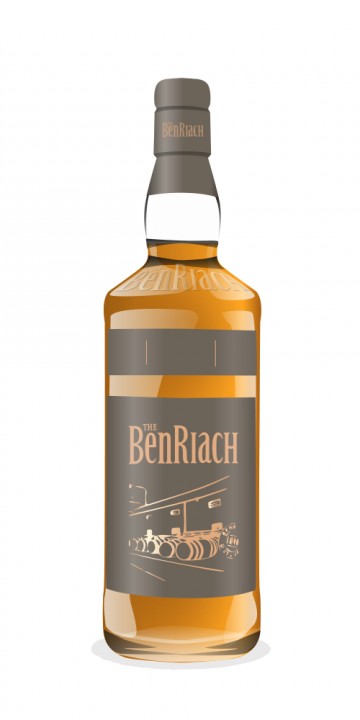 This BenRiach was matured in ex-bourbon barrels before being finished in ex-dark rum barrels from Jamaica. It was released in November 2006 as part of the first BenRiach “Wood Finish Series”.

The nose is light and floral. Notes of apples and banana come first, followed by cereal and vanilla flavours. Interestingly, I did not get any rum flavours. This is a pleasant but somewhat one-dimensional nose.

The palate is medium-bodied, sweet and just a bit spicy. There are more apple and banana flavours, followed by caramel and vanilla. I also got some notes of milk chocolate and a little bit of rum.

The finish is short, sugary and a bit spicy.

This is a single malt with a pretty uneventful taste profile. The rum influence is there but greatly subdued in my opinion. Nicely drinkable but not more.

I think we could do without the rum finishes in Scotch whisky. I just gave away the remains of a bottle of Balvenie Caribbean Rum Finish that for me was undrinkable due to its sickly, cloying sweetness. I like a little bite in my whisky. Thanks for the review. I have liked all the BenRiachs I have tried, but I will be avoiding this one.

Thank you, @BlueNote. I, too, am fond of the regular BenRiach expressions. However, this release here was somehow betwixt and between as the finishing in those "dark rum" casks did not really add many new flavours to the whisky and at the same time covered some of the distillery's characteristics. I fail to see what the purpose of this bottling was.

This BenRiach has potential, it's occasionally a 90 point contender but mainly just plain silly. But silly in a good way (!?), intriguing whisky – like a malty version of Jim Carrey for instance.

That's why the movie title "Eternal Sunshine of the Spotless Mind". Matured in ex-bourbon casks and finished in Jamaican dark rum casks, this whisky showcases a mix of something you should take seriously and pure laughter.

Some moments I felt like Joel Barish (the character played by Jim Carrey trying to forget his spouse Clementine) ready to forget this whisky, but realizing: I don't want to forget.

This Dark Rum finish is weird but has character. A weird mellow dram. Like a talented comedian playing a serious character and doing it good.

Taste: Darker than the nose. Spices and dark toffee with some milky chocolate notes. Water smoothens things very much.

Balance: Weirdo, which in this case I like. Versatility combined with a sense of humor.

@Rantavahti, thanks for your fun review.

It seems like a lot of my whisky friends have been on big Benriach kicks the last year or two. I've indulged and enjoyed too, but haven't yet acquired the attachment for that distillery brand...but there's still time.

Thanks @Victor! I myself am liking a lot of this "chameleon distillery", as Ralfy stated them. Not only their peated ones but every one of their drams has been more than okay for my taste. Then again, I know one whisky buddy who just doesn't seem to like anything they do. I'll be posting soon my review of the 17YO Solstice, which I absolutely loved.

This was my least favourite of the 6 malts we had - but I still liked it a lot! Non-chill filtered and with natural colour, so very light, straw. Almost like a light rum, somehow. Nose also brought out that light rum, with tropical fruits (banana) and some vanilla. Bit of a salty sea taste with more tropical fruit, more rum, rather sweet. The sweet goes nicely with the salty. Hot finish but medium length. Complex Scotch but the rum notes are not totally to my taste - still, very nice and surprising.

I tried the Caribbean Cask a few years ago, actually at the Balvenie distillery! It was part of a tasting paired with desserts at the Speyside Whisky Festival. That day is pretty much a blur - but I do remember liking it. Hard to go wrong with Balvenie....

Outta curiosity - have you ever tried the Balvenie 14 yr Caribbean Cask?

If so - how do these 2 whisky's compare to one another?

I can almost feel the dreadlocks seeping out of the top of my head when I drink this, the dark rum barrel used for creating this whisky has worked wonders both on the nose and the old taste buds.

This doesn't taste like rum as such but has some wonderful sugary, banana, toffee aromas which make me think back to walking along a Carabbean beach as the sun slowly sets behind me.

Wonderful brown sugar and the banoffee pie you get from Pizza Hut on the palate, there is also a hint of cinnamon and maybe even fresh thyme, but I may having West Indian flash backs again.

Oh and you want to know the best thing about this whsiky? The price, all the Benriach range is cheap as chips, if this was from one of the big names you'd be paying well over the £35 you can get this for.

Wasn't too sure when I got this one, but I sure don't regret it now! I really like to have different avenues when I pick what I'll be drinking: this one was a nice addition to my offering of tastes. Very good description by the way! And it is cheap!

Ha - I just got back from a Highland single malt workshop at an LCBO in Toronto - and the person who conducted the tasting (which was excellent, and this was one of the bottles we tasted) quoted your exact review in his notes (crediting a review of this whisky he read). What a small world!