Average score from 3 reviews and 12 ratings 89 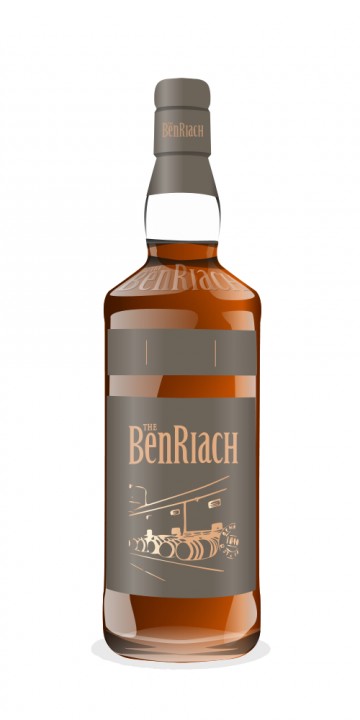 I always start a Ben Riach review by mentioning a horrendous 20 year old I had some years ago which put me off the distillery for a really long time. But this time around I won't.

Even though it was really bad.

OK, enough about that.

I made up for my Ben Riach hiatus by binge buying as many expressions as I could get my hands on. I like that they're easy to get hold of and within an acceptable price range. More importantly there is a maturation twist with most expressions, which I like. Plus they have these goofy names like , which is Latin for .

Good variety of flavors, easy on the wallet and a chance to practise a dead language?. That's a win win, if you ask me.

I've had this one sitting on my shelf for a while for no reason other than I just didn't get around to giving it a go. But a couple of days ago I felt it was time. And I'm glad.

This 15 year has been matured in traditional bourbon barrels before being finished off in casks from the bodegas of Jerez de la Frontera in Andalucia, Southern Spain, previously used to mature Pedro Ximenez sherry. My sample is from a brand new bottle and served at 46%

Medium body. Oak. Black peppers. Dark dates. Chocolate. Cinnamon. It's quite dry. Not as sweet as the nose. Quite savory. Under-ripe banana. Coconut. This is quite enjoyable.

This is a very enjoyable whisky from a solid distillery. If you let it breathe, as you should all whiskies, it gets even more sweeter over time. Good stuff!

Benraich seem to be specialising in these cask finishes expressions these days, with dozens to choose from at various ages. This one comes highly recommended by Jim Murray, but that can be a mixed blessing...

The marriage of Pedro Ximénez sherry casks, a very sweet concentrated sherry, with quite a light spirit is always likely to be won by the sherry and this is clear from the aroma. Sweetness from butterscotch and caramel are very strong with a sherry clove presence too. It’s classy stuff but not really the aroma of malt whisky.

The sherry continues to dominate on the palate with a rich bittersweet profile which almost wholly masks the native spirit. A rich syrupy mouth feel delivers a plethora of flavours including coffee, liquorish, candied fruit and alcoholic glace cherries. The dryer notes take over the finish with the coffee and cherry clove flavours lingering a while.

As a robust after diner dram or in place of a heavy peated whisky to finish a tasting session this would do good service, but it would be a better whisky if it carried some distillery character along with the cask.

This expression of BenRiach has been matured in American bourbon barrels and finished in Pedro Ximenez sherry butts. At 15 years old it has a wonderful nose. Raisins, dates, lime, barley and vanilla.

For the price this is a really good example of Sherry Finished Whisky.