Average score from 6 reviews and 6 ratings 76 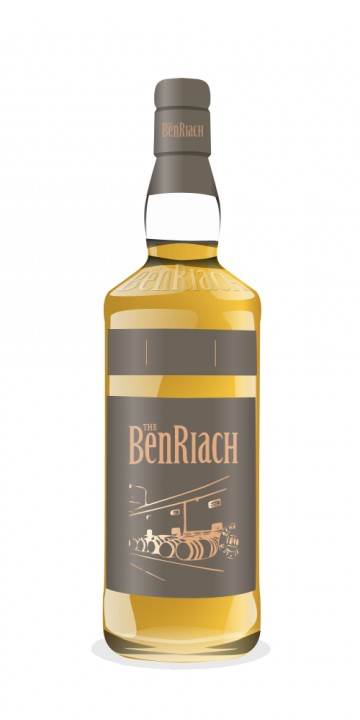 Neat at Domo Bar, Eurobuilding Hotel, Madrid (nice venue for scotch, they have an extensive list and not-so-high prices.) It pours straw-colored with some salmon streaks (sorry if I'm being a little pedantic when it comes to describing the hue). Aroma is rather low: raw cereal (more on the side of corn and wheat rather than barley; yes yes -I know this is scotch), pie dough, lemon drop, even some subtle hints of vanilla and peanut. In the mouth it starts with quite a powerful kick, but immediately fades into a very short-lingering, umami-laden finish. I'd say this is one to drink without paying much attention or care: the moment you pause to look it in the eye, it shies away.

Long time since I wrote a review, as I'm currently making some space in my cabinet for a few new bottles. So this is a review of an easy cheap NAS. Speysider, known as Heart of Speyside from the BenRiach distillery.

Nose: Fresh nose with soft elements of heather, grass and honey. soft undertones of salt and oak wood with a touch of spice. Very clean.

Mouth: fruity notes, soft and slightly buttery on the palate with once more hints of honey and heather. Tones of oak wood but not overly powerful and a whiff of pepper and soft smoke.

Finish: Stronger in the finish with powerful notes of pepper, sweetened up with a teaspoon of honey.

Harmless and overall pleasant, don't expect a complex majestic dram here for this price. But probably one of the better cheap entry-level whiskies out there.

Hard to say, given that BenRiach has some thirty or more expressions and a lot of single casks available on the market right now and that I've only tried five of them, limits my ability to answer your question. I guess I would have to say the Arumaticus Fumosus

Have you tried any of those? I'm very curious about the 19 PX but it's $150 which is a little steep, plus shipping. The Septendecim is only $80 plus shipping and the Authenticus 21 is $128.

BenRiach has had a troubled history ever since it opened in 1897. It was repossessed by the bank in 1899 and became a sister distillery to Longmorn. Four years later in shut down completely until 1965! Glenlivet purchased it and revived it, then it was bought by Seagram. In 2004 a consortium led by Bill Walker (former head of Burn Stewart) purchased it and its entire inventory, and since then they have done a fantastic job of revitalizing the brand while also coming out with a staggering number of new expressions, many of which are single cask bottlings.

The Heart of Speyside, named after their location, was one of their first releases in 2004 and remains their entry level, no-age-statement single malt.

The colour is a pale straw. Very soft nose, quite malty with biscuity cereal notes. Floral with heather and freshly cut grass. Honey and walnuts. Very clean, simple and crisp.

The palate has a bit more spice to it, with honey, toasted pecans and oak. Buttery croissants. Very nice but a little too one-note. Water doesn't seem to do much to either the nose or palate.

The finish is richer, and rather peppery before drying to a mildly spiced light honey. As you can guess, malt and honey are the dominant notes here. While it is a very pleasant and enjoyable dram, it remains an entry-level malt in every sense of the word.

People keep describing this as entry level. Well it is as far as the range is concerned, but if you mean you drink this as a new drinker to malt then move on, is just so wrong. This is a great whisky in its own right and do not forget it. I love it in the summer.

There is not much to say about this whisky really. It's very young and not complex. It reminds me of a medium-class blend. I event didn't care to write some TN. It's 12yo brother is so much better.

Since 2004, the BenRiach distillery is owed by a private consortium, that put down casks for maturation in 2004 (so the production was uninterrupted), but they plan to bottle that whisky no sooner than 2016. So everything you taste from this distillery now, was still produced by the previous owners. There are quite a few expressions, as can be seen from their official website at www.benriachdistillery.co.uk.

I plan to taste some 8 expressions of this distillery this week. I’ll start with their entry malt Heart of Speyside (NAS). It was bottled in August 2004, by the new owners.

The nose is very fresh, but rather lacking in complexity. However, one does not expect a lot of depth from an entry malt. I get some fresh hay and honey on the nose, but mostly flavours of nuts and oak with a bit of spice. Rather young dram, I think.

It’s quite smooth with some smoke, pepper and marmalade on the palate.

Against my initial expectation, the finish is rather long and nicely peppered.

This is not a big whisky, but a very good one to get to know the distillery’s style. This Speysider won the silver medale in 2006 at the International Wine and Spirits Competition and is available from retailers for approx 25 to 30 EUR.

BenRiach week - looking forward to this!