Average score from 2 reviews and 3 ratings 94 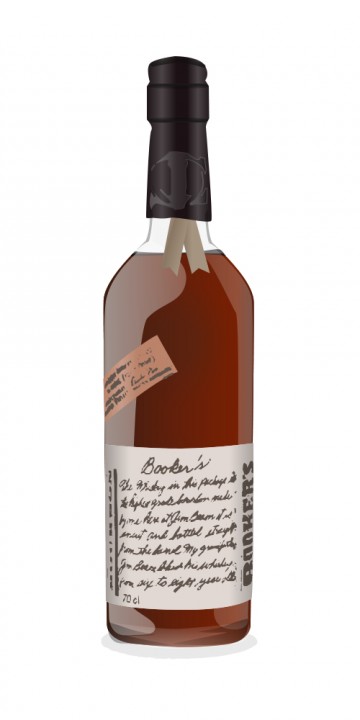 This bottling marks the 25th anniversary of the launch of Booker's. I don't know how many bottles were released, but not many. From Batch No. 2014-01, this bottling is much older than the usual Booker's - 10 years and 3 months - and is at a higher 130.8 proof.

The colour is a deep reddish amber - a shade darker than the regular Booker's. On the nose, very herbaceous (mint, coriander) with lime, oak, black liquorice, tropical fruits (mango, papaya), all wrapped with deep rich caramel and vanilla. Chocolate and coffee grounds. While the nose is a little more closed than the usual Booker's, it is no less complex (though it does open up with a little water).

On the palate - wow. Sharp and biting, this features old leather, burnt caramel, bitter oak, overripe cherries and a basket of assorted berries. Chili powder and nutmeg. Cigar tobacco. Mouth-coating. Spectacular. Water adds more herbs and Chinese Five-Spice. Like the nose, there is more subtlety here than the usual Booker's, but it's still powerful.

The finish is long and dusty with late-arriving spice and blackberries. This gets slightly higher marks than the usual Booker's due to a flawless palate whose richness and delicacy could be the absolute greatest of any bourbon I've ever tasted. I use the word "delicacy" rather loosely - this bruiser is anything but delicate, really - but I mean it in the sense of complexity and a fragile interplay of flavours. This incredible (and incredibly rare) bourbon will be very hard to find now, but if you do - grab it.

I had my first Booker's Bourbon around Christmastime, 1996. It made a big impression on me then, as Booker's does on most people who taste it. Booker's was my first premium bourbon. When I joined Connosr in December 2010 there were very few reviews of American whiskeys posted. I posted the first Connosr review of Booker's and the first Connosr reviews of quite a few other standard repertoire bourbons and US ryes. I was impressed that these very common US products were virtually unknown to Connosr's international audience at that time. Times have changed. Nowadays there are quite a few Connosr reviews of US whiskeys, so I don't have the sense of civic urgency to post a lot of reviews these days.

This 25th Anniversary special edition is 10 years old, instead of the usual Booker's Small Batch age of between 6 and 8 years. The 25th Anniversary Booker's Bourbon is uncut and unfiltered, @ 65.4% ABV. The reviewed sample is from a newly opened bottle

Nose: this is probably the best Booker's nose I have encountered; extremely intense vanilla, extremely intense natural caramel, strong high-pitched refined sugar, noticeable alcohol greeting, some oak and maple flavours, oak tannins, and some baking spices from rye. Usually I drink whisk(e)y without water, but I like this Booker's nose even better with 2 drops of water. The flavours coalesce beautifully with a little water

Taste: the nose flavours translate well, with especially intense caramel in this 25th Anniversary batch, and the usually strong Booker's palatal alcohol greeting. Water emphasises caramel flavours even more, with some increase also in the strength of the rye baking spice flavours of cassia/cinnamon and cloves

Balance: as is usually the case with bourbon, the balance here is between sweet and sour. What differentiates the 25th Anniversary edition of Booker's from batches of standard Booker's is a much stronger emphasis on natural caramel. The nose here is especially good, and this whiskey will greatly appeal to the nose-centric. If you like the increased caramel taste here you will like this special edition better than other batches of Booker's. While this 25th Anniversary edition is a nice and distinctive style, I do not see it as being generally superior to standard Booker's Small Batch in quality

Congratulations on achieving three hundred reviews! You certainly picked a fire-cracker to jump-start the next three hundred. It is fitting that you have chosen to review a truly iconic American expression.

Thank you @Victor, your contribution to Connosr is significant not only in volume, but also influence. I look forward to the next three hundred reviews.

@paddockjudge, thank you. You are a stalwart whisk(e)y friend.

As to the next 300 reviews for me? I really do prefer the depth and perspective which comes from reviewing from full bottles rather than from samples, but I still have 100 open bottles to work down, or to watch those bottles deteriourate. I suppose that for a time I will be reviewing mostly from samples and from my sister's bottles, since I have just about completed reviewing all of our own open bottles.