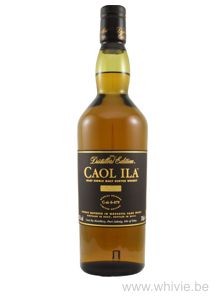 While the Distillers Editions from Diageo may vary from year to year, as far as I can ascertain Caol Ila has been part of the series many times, appearing for the first time in 2006 (so a distillate from 1993). It's quite the malt. And those of you who follow my blog a little bit, know that I have a soft spot for Caol Ila. The cask used for the second maturation of this Caol Ila was prepared with Moscatel, a wine from the Muscat grape. This is a distillate from 2007 and bottled in 2019. It ended up in the top three of almost everyone who joined my online master class which I hosted in March. The DNA of Caol Ila is unmistakable on the nose. Salty notes, oyster sap, dried kelp and soft smoke, even some monthol and a sheep's barn. The contribution of the muscatel casks seems rather limited to some Reine Claud and sultanas. Do I mind? Absolutely not. Do I like this nose? That must be a trick question. It is silky soft on the palate. Now I get mostly sweet notes at the front: think green apples, pears, sultanas and some walnuts. Then the typical character of Caol Ila appears that easily shoves the Muscat grapes to the side and offers salty notes and subtle smoke, as well as a hint of dried ham and some lime. My only concern, even though that is a big word, is that the finish is so short. The malt becomes lightly drying towards the end. I often taste Caol Ila. Really often. And then it is quite nice to taste a special variety, which this Distillers Edition certainly is. And then to think that you can buy this for around 65 euro.