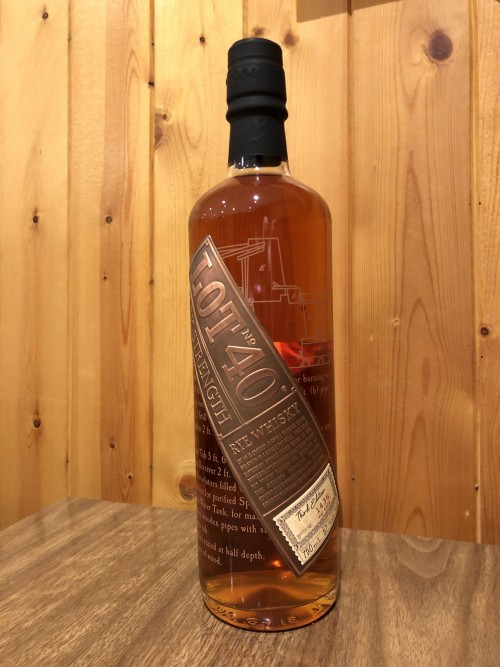 I’m a little late to the party on this one.

In 2017 Dr. Don Livermore rocked the Canadian whisky world with a cask strength 12 YO version of the popular Lot 40 100% rye whisky. It was phenomenal. He repeated the feat in 2018 with the second, 11 YO release. Many have said the second release was even better than the first.

Then came 2019. A lot of things happened that year. Shelter Point released one of the best 100% CS ryes ever brought to market (ADL juice). My daughter and niece celebrated their Bat Mitzvas (I believe that is when I tasted the Shelter Point for the fist time, and ordered some on sale at Kensington Wine Market). Alberta Premium released its first cask strength rye (at 65% it was COVID Strength and at least one fan used it as a disinfectant), and Dr. Don went for the three-peat with his 2019 edition. This one is NAS and is finished in French Oak casks.

As I mentioned I was a little late to this party. I didn’t have my own bottle for some time, and then I originally picked up only one as recommended by my Canadian whisky mentor, @paddockjudge. He did not think I would enjoy it as much as the others. So while there were many available, I waited. I tasted it once with @fiddich1980 and, I believe, @odysseusunbound. I believe this sample is from that very bottle, and is courtesy of @fiddich1980.

This expression is reviewed in my usual manner, allowing it to settle in a Glencairn after which I take my nosing and tasting notes, followed by the addition of a few drops of water, waiting, then nosing and tasting.

Fruity and spicy. Some aromatic flowers (?lilacs), and maybe grapefruit pith. Even post covid and during peak allergy season this nose is all over the place. Quite spirity. It made me sneeze. With time it evolves in the glass, becoming more floral.

Bitter and peppery on first sip. Overwhelmingly bitter. That’s it. There might be something underneath that but I can’t taste it.

Sour, peppery and astringent on the (relatively short) finish.

The bitterness is very unbalancing.

Water does not seem to make a difference.

@talexander reviewed this in 2020 and scored it 80/100 (he is often more generous than I am in scoring). He did a side by side with the 2018 edition and found the latter more to his liking. Here is his review:

I understand that this one is more successful when used in blending exercises. But s a sipper, I’m not a fan. I’m glad I did not stock up like I did with the first two editions.

In 2020 I believe there was no new release of a CS Lot 40. In 2021 Dr. Livermore launched the first “Rye Explorations”bottling in 2021, with a CS rye finished in casks that previously held peated whisky. It was not bad at all, but I’m hoping 2022 will see a return to plain, unadulterated, excellent cask strength Lot 40 rye.

Someone had asked Dr Don recently when he would release some other L 40 CS with maybe a Port finish which seems to work with Rye. I believe he said there were casks aging now with Port, Oloroso and Maderia finishes with the Maderia his favorite. So there is that, maybe.

8 days ago 7Who liked this?

@Astroke I think I will try before I stock up on any new releases, as I know I can be perfectly happy with the supply I currently have. And I will be extra wary of adulterated (finished) product.

@Nozinan,The Lot 40 Rye Explorations Release No.01was a swing-and-a-miss. I tried a cask strength sample before the release and it was a home run. Livermore hit it out of the park!...if all of the casks were of the same high quality it would have been a magnificent product....but it wasn't.

I didn't mind it. It's a mood whisky.

@paddockjudge Hey Buddy, last time I checked, the north side of the border is still a democracy!