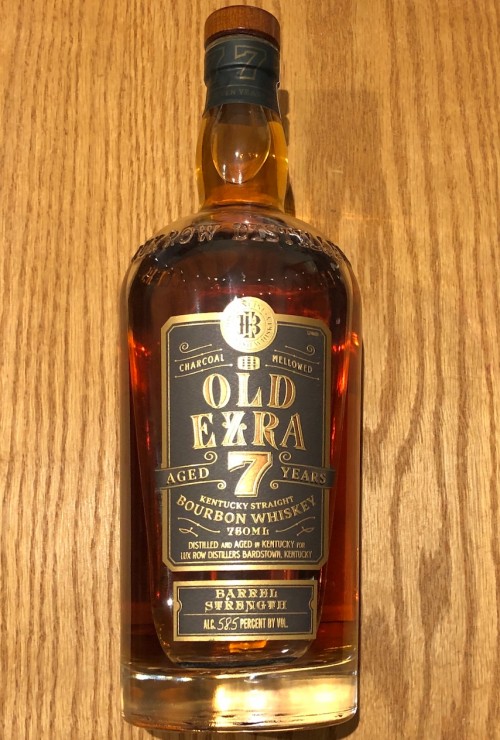 Old Ezra is a product marketed by Lux Row Distillers (who do not distill) in Bardstown Kentucky. The details about where they get their distillate is best explained in @Victor’s review here:

I don’t know if the information remains current. At least they clearly state it was distilled AND aged for them. So, essentially, they are a bottler. It is also, apparently, Charcoal Mellowed (nothing about this on the company’s website) and bottled at cask strength. The website states the ABV as 58.5%, same as on the bottle, so I assume they update the site with every batch. Interestingly, the US/Canada conversion (Imperial to metric?) is such that the LCBO placed a sticker on the bottle saying this is bottled at 58.0%.

This appeared at the LCBO for $70.60 in 2019. Now, one could argue that with a lot of bottles of whisky in the bunker, any new purchases should be “try before you buy”, especially an unproven (to me) brand that sources its whisky, but at the LCBO, nowadays, that means it could sell out before I get any. So at that price, a CS age-stated bourbon was clearly “Buy then try”. I bought one in November, and @Fiddich1980 was good enough to pick up 2 more for me (these had a metal goblet attached over each). I opened it 2 days later and after a couple of tastes decided I could do with 1 spare. @Paddockjudge was kind enough to give the other one a better home. This one still 4/5 full, gassed after each use.

This expression, a 25 cc pour in a Kentucky Bourbon glass, is reviewed in my usual manner, allowing it to settle after which I take my nosing and tasting notes, followed by the addition of a few drops of water, waiting, then nosing and tasting.

Spicy and sweet. A lot of brown sugar. The alcohol singes my nostrils. Lots of vanilla. Cola note, slightly cherry cola. Not overly complex, very typically bourbon. A good friend of mine mistook this for OGD 114. No flaws either. Water tones down the ethanol a little, allowing the caramel and vanilla to be more prominent. (22/25)

Sweet on arrival, dry development. Quite hot. Vanilla with a bit of caramel and brown sugar not far behind. Peppery. Something sour in the background. Some menthol and black liquorice. Oaky. Not bad. With water it becomes hotter, pepperier, and the other flavours get overwhelmed. Many bourbons, I have noticed, become hotter with the addition of water then settle down nicely over time. This is not the case here. (20.5/25)

Astringent, peppery finish. Fairly long. With water, more pepper in the finish, with menthol or wintergreen in the background. (21.5/25)

A bit unidimentional, alcohol is a bit too obvious, but nose and palate compliment each other. Water makes it a bit more unbalanced. (20/25)

I prefer this one neat, though I suppose it would depend on my mood and what I was doing. This is not a bad whisky at all and I would be happy to accept a glass if offered. Am I glad I have a spare? Would I buy it again? Tricky.

This bourbon, especially when tasted neat, has many of the flavour characteristics of Old GrandDad 114. It even fooled one of the best noses and palates in Canada. So with OGD 114 about half the price, where does this fit in?

The first thing to factor in is availability. If I didn’t have a few OGD 114 stashed away (purchased online and muled, brought over on a trip, and one awaiting mulage), this would be an excellent substitute.

As to the price difference, I’d have to ask myself: Would I pay $70 for OGD 114 in Canada? If I didn’t have the inventory, absolutely yes. It’s worth it to me. Of course I would only keep one spare, hoping to get cheaper ones in the US.

So as things stand currently, this bottle is welcome in my cabinet, but if someone did not have a bottle and really wanted it, I would let the spare go (but I’m keeping the goblet because the bottle I bought did not have one), because I prefer OGD 114 and I have plenty. And I have too much whisky…

Nice review! I have a bottle plus backup as well. This is a solid Bourbon as was the old 7 year 101 proof that this replaced.

I miss the times of the old Old Ezra: 101-proof for 14 bucks at the local liquor store. Not a beauty, but highly sippable.

@sailorman it has been years, hasn't it? Welcome back to Connosr!