Average score from 3 reviews and 3 ratings 77 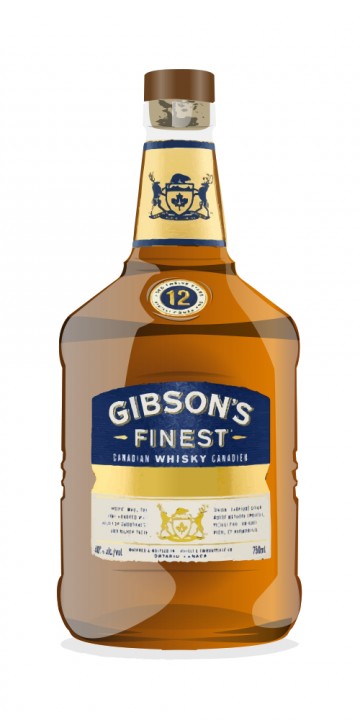 This whisky may seem a bit anti-climactic, since earlier today I looked at Lot 40 CS 11yo and CC41. But this one is interesting - a 375ml of Gibson's Sterling I bought at auction (with a 1971 Gibson's 12 year old), bottled I believe in the 1980s. The label advertises that the oldest whiskies blended here are at least 21 years of age. It is freshly opened.

The colour is a pale yellow. On the nose I immediately get buttered popcorn, a similar note to what I was getting on the CC 40 & 41 year olds (indicating to me that this is, if not 100% corn, by far mostly corn). It noses fresh and herbal, also candy floss, Mackintosh toffee and runny honey. A few drops of water brings out tobacco. Nice nose but a bit cloying.

Creamy on the palate with more toffee, marzipan, vanilla and some gentle oak. A touch of spice with chili and black pepper. Very buttery, more so with water. A tad sweet but very pleasant.

The finish is soft, long-lasting and full of buttercream, cloves and vanilla. I get the age with those spices and creamy / buttery mouthfeel, but it definitely leans toward the sweet side as with many Canadian whiskies of the 1980s. How does it compare with today's Sterling? Well, for one thing, the current bottling says the whiskies within are only four years old (nothing at 21!). The colour is a hair lighter than the 1980s bottling (but only a hair). The current bottling is weaker on all fronts (but it's not bad, and I'm glad it's not as sweet), though let's face it: the 1980s bottling is nothing to get super-excited about.

This whisky was originally produced to fill up the gap in demand for the popular Gibson's 12 Year Old whisky, and its popularity resulted in continued production. It is distilled at Hiram Walker in Windsor.

Nose: Fruity rye! I always get a breeze of white mulberries as I pour this one. The nose comes off a bit buttery and creamy with some dry rye bitterness as well which doesn't do it any favours. There is some light vanilla in the background, along with some light oakiness, maple, and light brown sugar. There's also a fair bit of graininess to it - there are smells reminiscent of some of the grainy vodkas. As I spend some more time with the nose the bitterness fades slightly and is replaced by a bit of sweetness and molasses. Not a great one, but ok - the bitterness is a bit too much and is out of place. 73%

Taste: It's light, smooth and reasonably sweet with some rye, maple, and clove amid a lemon-like citrusy backdrop along with some very gentle oak. The mouthfeel is quite nice and it feels juicy with the citrus and berry notes. There is a touch of bitterness in line with the nose but it isn't as bad on the palate as the nose. Some spices come out on the end - clove and cinnamon - but the cinnamon doesn't quite carry the spiciness of fresh cinnamon but has more the influence of cinnamon in pumpkin bread or the like. I get a lot of rum notes and am reminded a lot of Bacardi 8 year old as I sip this one. However, it is fairly easy-going and lacks complexity. It's also reasonably dry, which doesn't surprise me after the nose. 78%

Finish: The spices start of the finish before some molasses and woodiness, which is slightly sweet and is pleasant. There's some fruity rye which carries on for a decent bit afterward. It has medium length, but I was pleasantly surprised by it. 88%

Intrigue: reasonably pleasant, although the bitterness and nose could be improved and the taste is a little too laid-back. A decent value whisky, and apart from a few off-key bits it is quite pleasant. 78%

*I realized I would never have time to upload all my Canadian whisky reviews to connosr properly, so I've been importing the tasting notes in bulk to expand the whisky base on connosr (especially for the less impressive whiskies). For more info on the whisky (with similar tasting notes), see my post at whiskywon.wordpress.com/2014/04/…

Taste: quite smooth, light-bodied but with a silky delivery. Honey, then the tingling bite of hard rye flavour, Canadian-style. Not a lot going on but the elements come together nicely.

Balance: I had a bottle of this a few years ago and found it bland and spirity, one of the worst Canadians. The bottle I'm drinking from now is quite a bit more pleasant and drinkable. Not much on the nose but the silky arrival and spicy follow-up go over well. In many ways, the embodiment of your standard Canadian mixing whisky.