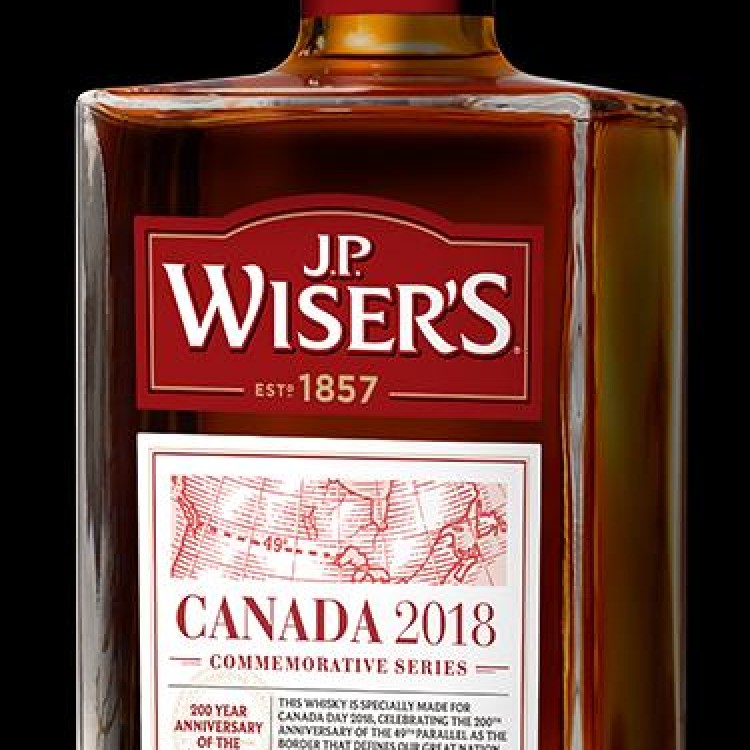 Our second whisky today is a brand new release from Wiser's, in their Commemorative Series (which I guess is annual?) This one commemorates the 200th anniversary of the 49th Parallel (which runs along the border between Canada and the US), which is pretty ironic since today is when our brutal trade war with America begins!

The colour is a medium amber. Flinty on the nose, with white pepper, pencil shavings, sage and a touch of vanilla. Almond skins. Pine needles. Tobacco smoke. Like creme brûlée with a grind of pepper on top. Water seems to do little to the nose or palate. Lots of varied notes here, but all work together in harmony.

The palate is soft with much more vanilla, also butterscotch, toasted oak and a hint of chili pepper. Milk chocolate. A dash of malt vinegar. Slightly oily mouthfeel. Not quite as complex as the nose but still very inviting.

The finish is chalky with more oak, cinnamon, a touch of clove and peanut brittle. This sits firmly in the Wiser's wheelhouse, with a nice balance between the sweet and the spice. If only President Trump was a drinker, we could send a case or two across that 49th Parallel to him so that he mellows out a little!

END_OF_DOCUMENT_TOKEN_TO_BE_REPLACED

Reading, I would think we tasted different whiskies, though the pepper is a common theme. I don't think I enjoyed it as much as you did. It might improve with time though. At least I know who to give the bottle to if I don't want to finish it...

@Nozinan @talexander I trust both your palates. How do I decide if I should buy one? Perhaps fate will decide. Thanks for the review.

Put us both in a room full of Scotch - last one standing wins...that likely won't be me...

I can provide you with a generous sample...

@Nozinan How very Highlander as a suggestion. There can be only one

@OdysseusUnbound well, I did review it in a Highland whisky glass...