Average score from 4 reviews and 5 ratings 87 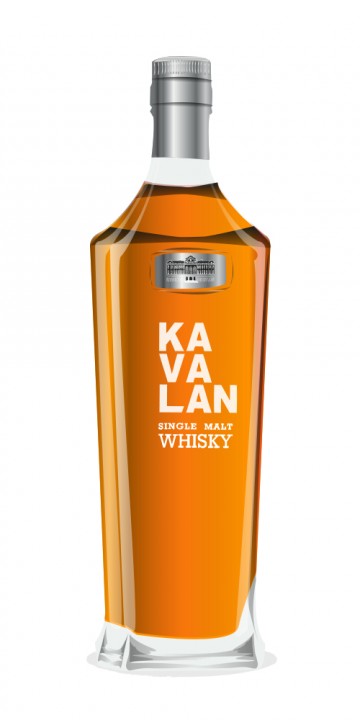 My first brush with this legendary distillery was through their insanely awesome Kavalan Solist Fino Sherry. I mean it literally grabbed me by the tenders and swung me through the air. There was no way I was prepared for that type of sensory onslaught. But one thing was certain, I was going to find out more.

I ran into a couple of more Kavalans in the next few months and was equally impressed. My curiosity grew. As did my appetite for whiskies from this Asian phenom and, given the slew of awards being won by them, I was obviously not alone in my opinion.

The brand Kavalan is owned by a Taiwanese group called King Car which, when you check their website, you realise is a massive industrial giant producing everything from root beer, processed foods, coffee, green tea, water to, of course, whisky. While the facade may seem monolithic there is certainly something wonderful happening behind those whisky doors to produce spirit of such brilliant quality.

While most of their expressions carry the name Kavalan they have also released one called the Conductor and is named after the distillery, King Car. There's not a lot of literature to go around regarding this specific release except that it's been composed of eight casks, two of which are bourbon and sherry and the rest only Ian Chang, the master distiller knows.

Rose water. Dark honey. Sherry oak. Red berries. Wild berries. Black salt. Chocolate. Betel nut lead. Tobacco lead. Cigar box. Quite herbaceous. Leafy greens. It's quite crisp. It has more of a sherry attack than bourbon which might shed some light on the remaining casks in play. Overall I like it. 22/25

Dark honey again. Bitter chocolate - the kind I like. Sweet molasses. Cinnamon. Black pepper. Rock salt. Tobacco. Red berries. Once again I feel the sherry is the dominant force here. Probably some type of Oloroso cask. It's quite a lovely crisp palate. There's a certain tanginess to it too which I quite like. 23/25

I wish there was more info to be had so that I could really see how the various components had been put together. It's not as good as the Solist series but certainly better than the core range. Solid whisky with absolutely nothing wrong with it.

Your reveiw has me interested. I tried to find out more about what's in it. For what it's worth, I found this on K&L's website from David Driscoll...

"After so much time spent merely reading about the great single malt whiskies from Taiwan's Kavalan distillery, we can finally get our hands on them here in the states! The first release from Kavalan back in 2008 was their classic single malt expression that uses ex-sherry, ex-Bourbon, and ex-wine casks of between four and four and a half years of age for the marriage. The King Car uses that formula with twice the sherry, and it's this whisky that I suggest those who are looking to try out one selection from the Kavalan portfolio begin with. The first thing that strikes you as you taste it is how un-youthful it is. It might as well be a 12 year old malt from the Scottish Highlands, but with an incredible supple-fruited character. It tastes like well-made, mature, Scottish single malt with extra concentration. It's new and exciting, yet familiar and easy-to-place."

@MaltActivist, I am glad to see you review this one. Thanks for another very well done and informative review. At Spirit of Toronto in 2014 I hung around the Kavalan stand for quite awhile and tasted 5 of the 6 whiskies they had available. By the time I got back to try the King Car, they had poured it all out, and I missed it.

"...not as good as the Solist series, but certainly better than the core range." gives me most of the information I am looking for, along with your 89 rating. We have King Car available here where I live now, but I consider it a bit expensive at near $ 100.

The King Car Kavalan distillery in Taiwan is still very young, founded in 1979. They got the help of expert Dr Jim Swan, which I have met at the festival in Ghent as a soft spoken, rather introvert man that bursts with enthusiasm for Kavalan. This Conductor is a vatting of 8 different casks, including a bourbon and sherrycask. The other 6? Who knowns? The whisky already scooped up three gold medals.

The nose is very fragrant and fresh, with exotic fruit like banana and oranges, toffee and some white fruit, vanilla and honey. Coconut as well. I feel the bourbon cask contributed a lot to the aroma. Sublte spices such as cinnamon and nutmeg. After a few moments, some mango and papaya emerge. Becomes creamy.

It is very oily and the attack is spicy. It is immediately drying, which suggests a wine cask. Wood shavings. Malt. Mango. A little zesty. Seville oranges make it somewhat bitter. Hints of chocolate.

In the rather long finish, the malt and vanilla linger.

Nice package, this King Car. I am truly impressed. Around 80 EUR, which I find a bit much. But then, it has to travel many miles. Much better than the two standard Kavalan offerings.

Number six in my ongoing Kavalan adventure is called the "King Car Conductor." This is apparently a combination of 8 different kinds of casks. The distiller, Ian Chang, has mentioned that the typical bourbon and sherry casks make up for two of those casks. As for the rest, it's anyone's guess.

Palate: Malty and fruity with a semi-dry tang to it. Lovely creamy consistency. Some oak and pepper. Mango and coconut dominate the fruit notes here, but there are others dancing about.

This is a good whisky. But I don't detect anything out of the ordinary that might account for the remaining 6 casks which aren't described. The bourbon cask seems to have done most of the work here. The sherry notes add a bit of spice. Perhaps some kind of wine cask was used for tangy dryness here? Not a strong wood presence, so I doubt any fresh casks were used, but I could be wrong. Speculation on my part, but I'm admittedly curious as to what elements were combined here. I'll have to ask them when I visit in a few weeks.

Regardless, it's good. It's not on par with the Soloists, but it's a step up from the introductory releases. At its core, it's basically a bourboned whisky. But the peppery kick and the bitter, semi-dry tang give it a bit more clout. The three elements combine nicely, and the result is a balanced, quite complex, and enjoyable dram.

Very interesting review. The heavy tropical fruit parade on the nose does seem to be beyond the range (pear, apple, honey, vanilla) of a typical bourbon cask bottle, imho. I would be interested in others thoughts on this point.

Have you learned any further info about the other six casks? I would guess/assume that port would be in there, almost by default. I also wonder if a variety of wine casks would make up the rest (maybe to include a Sauternes cask, a la Glenmorangie Nectar D'or?). Just a couple of random thoughts.

Do you happen to know if this one will cross the Pacific to Canada in the future? If so, I would guess that it would hit the shelf for $115+ as the Concertmaster is at $113 at the LCBO.

Maybe some rum cask in there...they can give tropical fruit flavours also.

When I came back around to the Kavalan table at Spirit of Toronto 2014 they had already finished pouring out the King Car. I did sample the other 5 on hand, though. Trying these Kavalans was great fun, and very educational. One day I'll get a taste of this one too.

"King Car" is essentially a vatting of 8 separate types of wood casks (including ex-bourbon, ex-sherry, and some others as well). This expression as opposed to the basic “Kavalan” and “concert master” is non chill filtered

oak, and also some bitter espresso , to balance all this sweetness. Yummy, mouth coating, and lovely balance.

This is a lovely whisky, well balanced, with the nice “kavalanish” tropical touches, as well the balancing bitterness of the wood, and espresso notes. Great mouth feel, and complexity. It’s clear Kavalan have chosen great casks for the vatting, and all the different types of casks well integrated to create further complexity and richness of flavours and aromas. Well done, Ian! . The only problem with thos excellent Kavalans is that they are not to be found anywhere.Neither in the USA, nor in the EU. I guess one can only get those if he visits the far east. I know most of the produce is aimed at Taiwan / China, but i wish more whisky lovers could enjoy this lovely whisky (and the other expressions). Let’s hope those become more widely available soon.

A most interesting sounding whisky. It sounds like the woods used have a lot to do with the distinctive flavour profiles. One day I hope to have a taste of this. Thanks for the very informative review.

Really good review, this is a whisky that I've had my eyes on for many months sadly it is only available in Singapore, China, Taiwan, Vietnam and Thailand.

Nice thing is that I've been in touch with the distillery and they've said that they're looking to release on a limited scale in Australia sometime in the near future. When that is only god can say though.